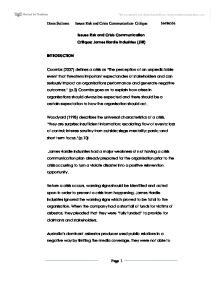 Issues Risk and Crisis Communication Critique: James Hardie Industries (JHI) INTRODUCTION Coombs (2007) defines a crisis as "The perception of an unpredictable event that threatens important expectancies of stakeholders and can seriously impact an organisations performance and generate negative outcomes." (p.3) Coombs goes on to explain how crises in organisations should always be expected and there should be a certain expectation to how the organisation should act. Woodyard (1998) describes the universal characteristics of a crisis, "they are surprise; insufficient information; escalating flow of events; loss of control; intense scrutiny from outside; siege mentality; panic; and short term focus."(p.10) James Hardie Industries had a major weakness of not having a crisis communication plan already prepared for the organisation prior to the crisis occurring to turn a violate disaster into a positive reinvention opportunity. Before a crisis occurs, warning signs should be identified and acted upon in order to prevent a crisis from happening. James Hardie Industries ignored the warning signs which proved to be fatal to the organisation. When the company had a shortfall of funds for victims of asbestos, they pleaded that they were "fully funded" to provide for claimants and stakeholders. Australia's dominant asbestos producer used public relations in a negative way by limiting the media coverage, they were not able to completely manage their crisis when external stakeholders and the media became in the company's agenda. The media therefore had to form their own opinion, and frame public perception of the company. Fink (2002) says Anytime. All the time. Be vigilant. Be Prepared. And if you operate in a prodromal, or vigilant, state, you may catch sight of something that needs to be addressed quickly, before it gets out of control. Before it becomes an acute crisis. (p.7) BACKGROUND James Hardie Industries (JHI) first identified a health risk to their workers in 1935, more than 37 years after the first known warning of health dangers of asbestos was introduced. ...read more.

said "the public relations role was relegated to a functionary mode, thereby losing its strategic input in organisational decision making."(p.265) FUTURE RECCOMMENDATIONS FOR JAMES HARDIE INDUSTRIES In 2020 asbestos related illnesses are set to peak, JHI should now be looking at the failed strategy from 2004 and look at future inevitable events as prodromes, because these events can trigger a future crisis. JHI still have an opportunity to discuss these matters and when a crisis occurs they can act accordingly, and learn from their organisations past mistakes. Throughout the crisis in 2004, JHI had all their key publics and stakeholders turn against them, and walk away from the damage and wrongdoings the organisation had done. In many crisis situations, organisations have little time to react and respond, especially if it is a major disaster. A full public apology and admitting fault and taking accountability for their wrong doings is a must for the future. As Banks (2006) suggests "The public is forgiving if measures are taken to prevent reoccurrence." Especially with what has been predicted for future victims and even deaths, the fact that there have not been any apologies to date or even having admitted fault will be brought into light again when more and more victims come forward with asbestos related diseases. It is about time that JHI show their publics and stakeholders that "YES" they have made many mistakes in the past. JHI need to be recognised as being accountable because they are at fault and it is the best policy to be adapted by them. JHI need to develop an issues management plan in the immediate future so they can be ready to respond to any issues they are faced with for the years to come. JHI need to handle and manage future issues in an ethical manner and consider all their actions. They need to train their staff on how to deal with issues and crises, ensure they are all media trained and utilise the media so they are able to control messages instead of letting the media set the agenda. ...read more.

Sympathy is the best policy in their case. Something else that JHI could do especially at this point in time is set up a web page or have a page on their website for asbestos victims that allows people to share their stories and give them a chance to have a voice, this would make them look credible and a responsible organisation because they are putting others first. JHI need to declare to show their publics commitment. They need to show that they are trying to solve the problem in this case they are trying to increase their profits so they are able to contribute to victim funds and need to reassure their publics that a crisis like this will never occur again because they have learnt from their mistake. They have to show their publics how they are contributing to funds. Once again "show not tell." JHI need to remain consistent especially through their messages, they must remain the same all the time and in JHI's case they need to take control of their messages in the future and not let the media set their own agenda relating to their organisation. Their messages should always remain clear, simple and effective in getting their story across. JHI need to show coherence with all their communication strategies. This worked well for them in 2001 when they had all their strategies timed. They need to continue to focus on having their communication in a reasonable manner. Finally, JHI need to show their publics clarity in all issues put forth to the company. Company representatives should be able to clearly explain the company's position in any issue and clarify their actions and why they chose to take those actions in particular. If James Hardie Industries remain profitable and adapt more public relations theories and focus on re-building trust and the organisations reputation, they will appear credible with all their stakeholders and have a strong stance in the Australian market. James Hardie Industries are already proving to be profitable; all they can improve is their reputation after this crisis and in future ones. ...read more.