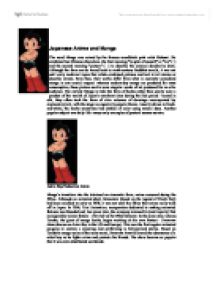 Japanese Anime and Manga The word Manga was coined by the famous woodblock print artist Hokusai. He combined two Chinese characters--the first meaning "in spite of oneself" or "lax" ( ) and the second meaning "picture" ( ) to describe the comical doodles he drew. Although the form can be traced back to ninth-century Buddhist scrolls, it was not until early medieval Japan that artists combined pictures and text to tell stories or describe events. Even then, their works differ from what is currently considered manga in one crucial respect: whereas modern-day manga are produced for mass consumption, these picture scrolls were singular works of art produced for an elite audience. The earliest Manga to take the form of books rather than scrolls were a product of the wealth of Japan's merchant class during the Edo period - bound in silk, they often took the form of slim volumes of drawings accompanied by explanatory text, with the stage an especially popular theme. ...read more.

The show became so popular that it was even distributed worldwide. Chibi maruko-chan In 1977, Uch� senkan Yamato (Space Cruiser Yamato) was released, and for the first time an animated feature film achieved huge commercial success with teenagers and even adults in Japan. Before this animation was primarily seen as being for children, and held a status equivalent to Disney cartoons in the West. Anime is now firmly established in Japanese cinema, with Mononoke-hime (Princess Mononoke), a historical fantasy adventure released in 1997, the greatest box-office hit of all time. The Japanese manga and anime style is distinctive and fairly easy to recognize. Although the popular image is of characters with huge, brightly coloured hair and large eyes, there are many variations, from L. Matsumoto's seemingly unevenly drawn "ugly" protagonists, to the soft-edged figures of Miyazaki Hayau. The narrative style also differs dramatically from Western comics, with more ambiguity and less emphasis on heroes. ...read more.

Sailor Moon Increasingly, many Western movies are influenced by anime. Kathleen Kennedy, executive producer of Steven Spielberg's The Lost World: Jurassic Park, has acknowledged that Spielberg's method of putting together a film closely resembles the composition of an animated film in the sense that the visual idea precedes the story. The computer-generated images used so lavishly in The Lost World and other recent Hollywood films are in essence animation drawn by computers. Anime can be seen as a major influence on the process which has seen animated films like Toy Story and Antz become big hits with both adults and children. There are now even anime films made in the West, such as Titan A.E. Right now, anime and manga enjoy huge popularity, both in Japan and around the world. Pokemon, Sailor Moon and Dragon Ball have all been huge worldwide hits. It seems that the success of Japanese animation is set to continue for a long time. ...read more.

It is probably true that "the success of Japanese animation is set to continue for a long time" but the essay has not really explained why this is the case, because it has not gone into any detail about the style, content and consumption of Manga or Anime. Overall, this is an informative but superficial historical account that could do with a bit more reflection on what is unique about the form, the content, and the audience of these two artforms.