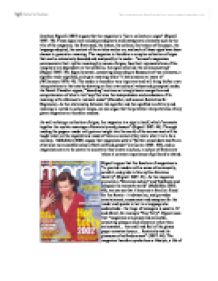 Jonathan Bignell (1997) argues that the magazine is "just a collection a signs" (Bignell 1997: 78). These signs may include paradigmatic and syntagmatic elements such as the title of the magazine, the fonts used, the layout, the colours, the texture of the paper, the language adopted, the content of the articles and so on, and each of these signs have been chosen to generate a meaning. The magazine is therefore a complex collection of signs that can be extensively decoded and analysed by its reader - "women's magazines communicate their mythic meaning by means of signs, thus their representations of the imaginary are dependent on the symbolic, the signs which do the communicating" (Bignell 1997: 78). Signs however, consisting (according to Saussure) of two elements, a signifier and a signified, only gain meaning when "it has someone to mean to" (Williamson 1978: 40). The reader is therefore very important and will bring his/her own interpretations to the texts by drawing on their own cultural values and perceptual codes. As Daniel Chandler argues, "'decoding' involves not simply basic recognition and comprehension of what a text 'says' but also the interpretation and evaluation of its meaning with reference to relevant codes" (Chandler, web source: Semiotics for Beginners). As the relationship between the signifier and the signified is arbitrary and meaning is rooted in cultural values, we can argue that the potential interpretations of any given magazine are therefore endless. As well as being a collection of signs, the magazine is a sign in itself, which "connects together the mythic meanings of femininity and pleasure" (Bignell 1997: 66). Through reading the pages a reader will gain an insight into the world of the woman and will be taught what are the expectations made of them as women (they learn what it is to be a woman). ...read more.

It could indeed be argued that one could successfully (and with minimal disruption) take the models from the covers of More! and 19 and place them on a magazine such as FHM that adheres to its own set of generic codes and conventions and encourages very different interpretations from its reader. According to Bignell, the images of beautiful women on the covers of female magazines are "iconic signs which represent the better self which every woman desires to become" (Bignell 1997: 69). The figure thus represents the self for the reader, a future image that is attainable for her if she continues reading and learning from the magazine. On a male magazine however the same figure would represent a sexual image, an object to be attained by the male reader. It becomes evident therefore that "men look at women. Women watch themselves being looked at ... Thus she turns herself into an object - and most particularly, and object of vision: a sight" (Berger in Vestergaard & Schr�der 1992: 81). This is a somewhat negative interpretation of the centrality of women on the covers of magazines. However, Bignell sees that "while the cover image is for a woman to look at, it is constructed with reference to a wider social code in which being feminine means taking pleasure in looking at oneself, and taking pleasure in being looked at by men" (my italics, Bignell 1997: 71). Bignell therefore seems to empower the woman in his analysis of cover models, noting that women simultaneously enjoy looking and being looked at. The genre (or textual code) in which the image appears is therefore a fundamental contributor to the construed interpretations made by the reader. ...read more.

Indeed, some of the readers of these magazines are male (e.g. the brothers or boyfriends of the female readers - Bignell refers to these as "non-ideal readers" (Bignell 1997: 58)), and they will interpret the codes differently to their female counterparts as they arguably do not share their interests in beauty products and fashion. Their interpretations of the sex issues may also differ, as they will gaze at the images of women as sex objects as opposed to icons and role models. Chandler sees that "social semiotics alerts us to how the same text may generate different meanings for different readers" (web source, Semiotics for Beginners), and this is certainly true of the gendered readings of teenage magazines. Chandler further notes that the signs (or codes) within the text "do not just 'convey' meanings, but constitute a medium in which meanings are constructed" (ibid). Through reading a magazine aimed at her demographic group, a teenage girl will therefore come to learn that society expects her to be interested in boys, sex, fashion, beauty and fame. The magazine is therefore a "powerful ideological force" in society (McRobbie 2000: 69); the image and behavioural ideologies presented within the magazine covers become the stereotypical norm for the teenage girl. Applying semiotic analysis to the magazine text therefore allows us to identify social ideologies of the teenage girl. One could analyse the front covers of magazine extensively, decoding the codes of colour, font, layout and spatial arrangements as well as the titles, taglines, language and central images to show the construction of the teenage girl in the media. Teenage magazines may not provide an altogether accurate representation of all teenage girls today, but it is certainly a medium that provides escapism and enjoyment for the reader whilst subliminally educating and informing at the same time. ...read more.