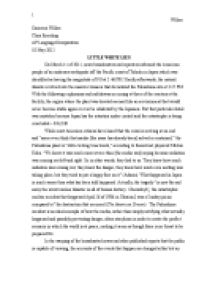 ﻿Wilkes Cameron Wilkes Chris Emerling AP Language/Composition 10 May 2012 LITTLE WHITE LIES On March 11 of 2011, news broadcasters and reporters informed the American people of an undersea earthquake off the Pacific coast of Tohoku in Japan which was identified as having the magnitude of 9.0 at 2:46 PM. Shortly afterwards, the natural disaster evolved into the massive tsunami that devastated the Fukushima site at 3:27 PM. With the following explosions and meltdowns occurring at three of the reactors at the facility, the region where the plant was located seemed like an environment that would never become stable again or ever be inhabited by the Japanese. But that particular detail was mistaken because Japan has the situation under control and the catastrophe is being concluded ? FALSE! While most American citizens have heard that the crisis is arriving at an end and ?some even think that maybe [the issue has already been] solved or contained,? the Fukushima plant is ?still a ticking time bomb,? according to theoretical physicist Michio Kaku. ...read more.

If the citizens in the western area of the United States had the knowledge that the disaster was an issue that was still active and moving, the death of those infants killed could have possibly been prevented. When the media preserves the truth, the readers and listeners are wounded worse than they would have been harmed if they had discovered the conflict at hand at the beginning. Not only is dishonesty insecure and precarious, but also immorally wrong. Even though the definition of journalism is ?writing characterized by a direct presentation of facts or description of events without an attempt at interpretation and without opinion,? the press that issues newspapers does not follow this guideline. ?Today's establishment media practice very little journalism and they devote minimal resources to reporting actual news. Instead they have become a mechanism to create and maintain public perception. They spend most of their resources to create a false reality for the public while they distract you from the most important issues facing our world? (?Media Deception?). ...read more.

Not one single person deserves to have the wool pulled over his or her eyes and have the truth hidden from him or her by the media since conveying false stories about informational sources and reports does not aid in the prevention of criticism or menace but instead makes matters much worse. Precluding citizens from having the right to know what occurs in the world is iniquitous and should be displayed as unconstitutional because the fact that ? the First Amendment gives broadcasters the right to lie or deliberately distort news reports on the public airwaves? is corrupt and incorrect (Gaddy). As for the lies that are already spread out around the world and those that are being created at this moment in time, pandemonium could most likely break out and dismantle the government and its precious media if all is not revealed sooner or later. Subsequent to examining what was said to have happened and what actually occurred and is still taking place in the surrounding areas and at the location of the Fukushima site, one should be able to construct an accurately rational and logical prediction to what may come about the community, the nation, and the world in the next several years. ...read more.