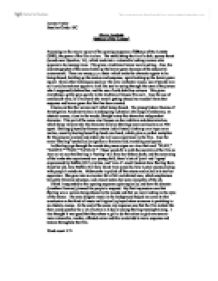 Macro Analysis "Silence of the Lambs" Focussing on the macro aspect of the opening sequence of Silence of the Lambs (1991), the genre of the film is clear. The establishing shot is of a dark, spacey forest (woods near Quantico, Va), which leads into a vulnerable looking woman who appears to be running alone. This gives a traditional horror movie setting. Also, the cinematography of the scene backs up the horror genre because of the subjective camerawork. There are many p.o.v. shots which make the character appear to be being chased, building up the tension and suspense, again backing up the horror genre aspect. Some other techniques used are: the eerie orchestral music, use of steady cam so it could sometimes appear to look like you're seeing through the eyes of the person who's supposedly behind her, and the use of cold dark blue colours. ...read more.

Straight away this shows her independent character. This part of the scene also focuses on her ambition and determination, which helps viewers take the character (Clarice Starling) more seriously as an FBI agent. Starling (played by famous actress Jodie Foster) climbs up on a rope on an incline, sweatily hauling herself up hand over hand, which gives a perfect metaphor for the personal journey and ordeal she will soon experience in the film. Also the name "Starling" symbolically signifies a feminine bird, trembling and quaint. As Starling jogs through the woods she passes signs on a tree that read: "HURT," "AGONY," "PAIN," "LOVE-IT." These words fit in with the narrative of the film as later on we see that Starling is 'hurting' still from her fathers death, and the screaming of the lambs she experienced as ...read more.

I think I responded to this opening sequence quite typically, and how the director (Jonathan Demme) planned for people to respond. My first impression was that Starling was a woman being chased in the woods and that we were looking in the eyes of the chaser. The none diegetic music in the background helped me come to that conclusion as that kind of music isn't typically played when someone is partaking in an obstacle course. At the end of the scene my response was that the film looked like there could possibly be a lot of action in it due to seeing Starling running/training. I also thought it was good that they chose a girl to do the action as girls are seen as more vulnerable, weaker, effected easier and this would add to more suspense and tension throughout the film. Word count: 573 Leanne Taylor Baseline Grade: B/C ...read more.