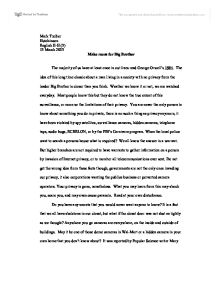 Mark Treiber Hutchinson English II-H (3) 13 March 2003 Make room for Big Brother The majority of us have at least once in out lives read George Orwell's 1984. The idea of this long time classic about a man living in a society with no privacy from the leader Big Brother is closer than you think. Weather we know it or not, we are watched everyday. Most people know this but they do not know the true extent of this surveillance, or more so the limitations of their privacy. You are never the only person to know about something you do in private, there is no such a thing as privacy anymore, it have been violated by spy satellites, surveillance cameras, hidden cameras, telephone taps, audio bugs, ECHELON, or by the FBI's Carnivore program. When the local police want to search a persons house what is required? We all know the answer is a warrant. But higher branches are not required to have warrants to gather information on a person by invasion of Internet privacy, or to monitor all telecommunications ever sent. Do not get the wrong idea from these facts though, governments are not the only ones invading our privacy, it also corporations wanting the publics business or perverted camera operators. Your privacy is gone, nonetheless. What you may learn from this may shock you, scare you, and may even cause paranoia. Read at your own disturbance. Do you have any secrets that you would never want anyone to know? ...read more.

Within the last few years the FBI has started to not get information from people's computers with a warrant but rather will go directly to the suspects Internet Service Provider (ISP). This in fact can be considered a violation of ones civil liberties. This is even truer because according to the law at this time, when someone signs up for Treiber 4 an internet account they are not required to give information such as their name before they sign up for an account, and more importantly most ISP's are willing to provide an anonymous internet account to those who request it. At this point it is obvious one who signs up for such an account is concerned about their privacy and revealing their identity, but the government is now taking away that "piece of mind" that the consumer once had by having an anonymous online alias. David Banisar co-author of The Electronic Papers says, "Administration unwisely wants to make it easier to obtain people's identities, trace their movements online, and apply wiretapping to the Internet." (McCullagh, Declan "U.S. Wants to Trace Net Users") This want to take away privacy of the Internet from all to prevent the bad actions of a few has worked itself into a "Catch .22". The two options are, either take away innocent citizen's privacy on the Internet, or to continue to let criminals have the ability to remain totally anonymous, at their fingertips. This problem not only affects the consumer but the ISP as well. ...read more.

Identity fraud and theft is more prevalent today that it ever has been. This is a result of the technologically advanced world we live in now. I personally know someone who has been the victim of identity theft and it is far worse than it sounds. She told me that thousands of dollars of her heart earned money had been carelessly spent on pornography. Another common problem with computer security is the misuse and abuse of administration privileges in private companies. Many companies have been reported for using what's called keyloggers to record everything an employee types, enabling them to acquire bank account numbers and passwords, and passwords to personal e-mail accounts. To conclude, what is being done as safety measures for our country, and for Companies can often jeopardize the public's privacy. These security measures are indeed good, but it is their abuse and misuse that can lead to havoc. In this new age of Treiber 7 technology it is getting easier for computer hackers to gain access to these security measures used by out government. It must be taken into consideration that any power that initially is used for good can fall into the wrong hand and be used for the opposite reason it was developed. The new surveillance techniques used today need to be used more carefully; not only to prevent its misuse but also, to make sure that the privacy of the innocent is not invaded. Now knowing of the little privacy that actually exists, be careful of what is ever said over the phone, in e-mail, or in a fax. You indeed are never the only one to read it. ...read more.