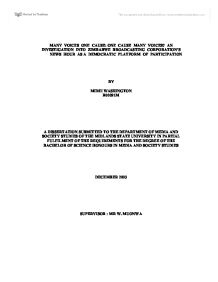 Many voices one cause: One cause many voices? An investigation into Zimbabwe broadcasting corporation's news hour as a democratic platform of participation.

MANY VOICES ONE CAUSE: ONE CAUSE MANY VOICES? AN INVESTIGATION INTO ZIMBABWE BROADCASTING CORPORATION'S NEWS HOUR AS A DEMOCRATIC PLATFORM OF PARTICIPATION BY MIDZI WASHINGTON R00091M A DISSERTATION SUBMITTED TO THE DEPARTMENT OF MEDIA AND SOCIETY STUDIES OF THE MIDLANDS STATE UNIVERSITY IN PARTIAL FULFILMENT OF THE REQUIREMENTS FOR THE DEGREE OF THE BACHELOR OF SCIENCE HONOURS IN MEDIA AND SOCIETY STUDIES DECEMBER 2003 SUPERVISOR : MR W. MUONWA ABSTRACT This dissertation investigates the notion that ZBC - TV news hour is wont to favour or promote ideas espoused by the ruling party and government at the expense of other oppositional political voices. The main thrust of this study has been to investigate how news content of ZBC's news hour was structured especially during the 2002 Presidential Election Campaign. The investigation was done during the campaign period but the quantitative data used here only encompasses the period between December 1,2001 and March 8, 2002.Qualitative and institutional research methods were also used in a bid to establish the nature of the relationship between the programming of news at ZBC and the various voices that were presented by the public broadcaster, especially during the election period. How the different voices were presented is also of interest to this study. This enquiry is therefore a product of curiosity to try and investigate how the establishment and its policies influences public service television programming. As a recipient of public funds ZBC has an obligation to reflect the views and serve the information needs of all Zimbabweans. Media Monitoring Project Zimbabwe argues : "This obligation to reflect a variety of views is especially strong at election times when voters depend upon the media to provide them with accurate information; both about the practicalities of how to exercise their democratic rights and the views of the different parties on the main campaign issues." Media Monitoring Project, Zimbabwe (2000) DEDICATION To all my family " Prophets are never accepted in their home town " ACKNOWLEDGEMENTS This dissertation is a product of cooperation. ...read more.

These were then asked to view a news bulletin. After that there was a discussion of what each one of them thought about the programme and how representative it was in terms of coverage of different voices. The following were sampled: Female secretary General male worker (must be a parent) General female worker (must be a parent) 2 male and female Humanities students 2 male and female Science students This sample roughly tries to source views across class, age and sex. 3.3.2 Audience Participatory Observation This was done mainly to reduce the error in the focus group approach where people watched television away from its natural place of consumption. According to Lull (1992: 63), the consumption of television competes with other information sources such as VCRs. Other critics are even pessimistic about the idea of a television audience. The method of Focus Group Interviews is usually criticised for creating false television audiences. According to Lull, family television viewing is not formal and systematical. People watch television while doing other things. For example, they may also be listening to music, talking amongst themselves and so on. All these things cannot take place in the " false audiences" of focus groups. Again the other fact is that the actors took note of that they were being observed and this must have distracted them in a way. Participatory Research was therefore done to cater for such weaknesses. The strength of this approach is that people were observed in quasi-home environments. The University Rusununguko common room was selected for my participatory observation of ZBC TV newshour. This was mainly because this is the only hostel with a television set and therefore male and female students watch television together. The programme was given two (2) weeks participatory observation. 3.4 Limitations of Methodology The use of typical case sampling in the choice of the programme that was analysed constitutes part of the weaknesses in this dissertation. ...read more.

In most instances they do not play a big role in development communication so much needed by lowly developed countries (LDCs). As such, even in the liberalised and democratised environments, public service broadcasters are still crucial in the communicative action of the masses to the governors and vice-versa. In terms of participation, the commercialisation policy at ZTV evidently benefits civil society groups, which normally pose as inclusive and representative of the majority yet in actual fact, are exclusive and representative of minority interests. As a result of the imbalances in programming, ZTV is reduced to a public broadcaster of the minority rich and the politically powerful posing as the public. This study recommends that further study be conducted on the question of how commercial advertising impacts on programming on ZTV in order to fully establish the effects of private capital on public service broadcasting space. 5.4 Summary and Conclusion This thesis focused on the effectiveness of ZBC-TV newshour as a platform for democratic participation. It was discovered that state interference influences news programming in a number of ways but in the main, undermines the programming values and ideals of a public broadcaster. Accordingly the classical Marxist position asserts that the mass media simply disseminate the ideas and worldviews of the ruling class, and deny or defuse alternative ideas. This is very much in accord with Marx's argument: "The class which has the means of material production at its disposal has control at the same time over the means of mental production, so that thereby, generally speaking, the ideas of those who lack the means of mental production are subject to it." Marx and Engels: The German Ideology, Cited in Curran et al (1982:22) According to this stance, the mass media function to produce 'false consciousness' in working classes. This leads to an extreme stance whereby media audiences see media products as monolithic expressions of ruling class values, which ignores any diversity of values within the ruling class and within the media, and the possibility of oppositional readings. I therefore proposed an independent regulatory body to regulate, among other things political meddling at ZTV. ...read more.