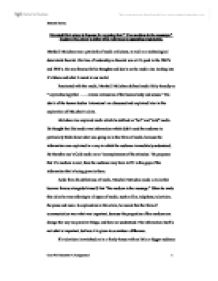 Marshall McLuhan is famous for arguing that &quot; The medium is the message.&quot; Explore McLuhan's claim with reference to opposing arguments.

Marshall McLuhan is famous for arguing that " The medium is the message." Explore McLuhan's claim with reference to opposing arguments. Marshall McLuhan was a patriarch of media criticisms, as well as a technological determinist theorist. His time of leadership as theorist was at it's peak in the 1960's and 1970's. He was famous for his thoughts and idea's on the media also looking into it's future and what it meant to our world. Fascinated with the media, Marshall McLuhan defined media fairly broadly as " any technology that ...... creates extensions of the human body and senses." His idea's of the human bodies 'extensions' are discussed and explained later in this exploration of McLuhan's claim. McLuhan also explored media which he defined as "hot" and "cold" media. He thought that Hot media was information which didn't need the audience to particularly think about what was going on in that form of media, because the information was explained in a way in which the audience immediately understood. He therefore see's Cold media as an 'incompleteness of the stimulus.' He proposes that if a medium is cool, then the audience may have to fill in the gaps of the information that is being given to them. Aside from his definitions of media, Marshall McLuhan made a claim that became famous alongside himself, that "the medium is the message." ...read more.

However, McLuhan did believe that human beings do take advantage of these technological extensions and become lazy and disruptive of our world. E.g. Using a car too frequently as an extension of the feet, can be to blame for some of the pollution of today. Technology can be extended and also over extended. For example, the over-extension of phone culture can engender a need for solitude. Moving on, these extensions developed and in ' Understanding the Media,' McLuhan talked of electronic technology, where he then developed an idea that one day we would have an interconnected world. When the medium of the Internet was developed and became in use in 1995, it sounded a lot like McLuhan's idea of the interconnected world. But McLuhan did say that in the electronic world, electronic media resembled the extensions of our central nervous system. He said that there was a global shift from print to electronic media. Television transformed the world into this interconnection and he calls it a 'global village.' " Today, after more than a century of electronic technology, we have extended our central nervous system itself, in a global embrace." (Marshall McLuhan, 1964) Because of the electronic world, McLuhan said the globe is no more than a village because we can contact anyone we want at any given time, and view any information at anytime through it. ...read more.

think that the book leads in sources of information, but I do believe that it is still very much used and life would be more restricted for information and research without it. Although it is still very much in use, there is the use of the interconnected world, just as McLuhan predicted. The Internet is used every day by millions of people, for research and work purposes, as well as many other requirements. It is a quicker and much more accessible way of finding out information, and search engines, such as "Google" and "Ask.com" provide pages upon pages of information concerning the desired topic. The information appears to be endless. In conclusion to McLuhan's claim, "The medium is the message," I have discovered that his meaning behind this, was linked to the electronic world of technology, and the extensions of the human body. McLuhan said that how the message is given to its receiver can be more important than the message itself because how we feel about getting the message is of great importance, which relates to the idea of the global village. Talking to someone on the phone, for example, who is on the other side of the world can feel like they are just in the next room, and because of that medium, it makes the person react in a certain way, and therefore is the message, because it has created something brilliant. ...read more.