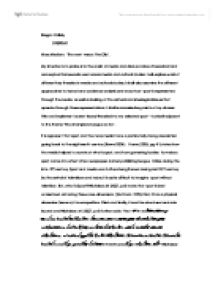 Kiegan Vallely 07839062 Mass Medium: 'The new' versus 'the Old'. My intention is to probe into the world of media and discuss various theoretical and conceptual frameworks used across media and cultural studies. I will explore work of different key theorists in media and cultural studies. I shall also examine the different approaches to textual and audience analysis and study how sport is represented through the media, as well as looking at the cultural and ideological issues that operate through these representations. I shall summarise key points of my chosen title and implement current issues/theories into my selected sport - football adjacent to the theme 'The champions League so far'. It is apparent that sport and the mass media have a particularly strong association going back to the eighteenth century (Rowe 2004). Horne (2006, pg 41) states how the media helped to construct what is sport, and how governing bodies for various sport came into effect after newspapers started publishing league tables during the late 19th century. Sport and media was further strengthened during mid 20th century by the arrival of televisions and today it is quite difficult to imagine sport without television. But, what is Sport? Nicholson.M (2007, p.4) notes that sport is best understood as having three core dimensions (Guttman 1978). First, it has a physical dimension Second, it is competitive. Third and finally, it must be structured and rule bound and Nicholson. M (2007, p.4) further adds "that it is worth nothing because mediated sport is almost exclusively highly structured highly competitive and very physical. In fact, sports such as football, which empathise, if not exaggerate sport's tripartite definition, tend to dominate media coverage generally and television coverage in particular." Nicholson (2007, p.10) also states "A cumulative total of 28,800 million people through-out 213 countries watched the 2002 tournament in Korea and Japan." From this we can establish that masses of people are consuming masses of products within sport. ...read more.

The Hypodermic Needle Model, dating from the 1920s was a theory suggesting that audiences passively absorb information transmitted via a media text without any attempt to process or challenge the data. Governments then had just discovered the power of advertising to communicate a message and created propaganda in persuading the public to their way of thinking. During the 1960s, as the first generation to grow up with television became adults, it became increasingly evident to media theorists that audiences made choices about what they did when consuming texts. Far from being a passive mass, audiences were made up of individuals who consumed texts for different reasons and in different ways. In 1948 Lasswell suggested that media texts had the following functions for individuals and society: surveillance, correlation, entertainment ,cultural transmission. Blulmer and Katz expanded this theory and published their own in 1974, expressing that individuals might select and use a text for the following purposes (i.e. uses and gratifications): Diversion - escape from monotonous routines. Personal Relationships - using the media for emotional and other interaction, e.g. Supporting your football team. Personal Identity - finding yourself mused within texts, copying behaviour and values from texts like spitting casually because your footballer hero does it. Surveillance - Information which could be useful such as weather forecasts, ticket/plane prices to for a coming fixture. Since then, the list of Uses and Gratifications has been extended, due to new media forms existing such as video games, digital television and the internet. Extending the concept of an active audience even further, during the 1980s and 1990s, an approach into the way individuals received and interpreted a text, and how their individual attributes such as gender, class, age and ethnicity affected their reading. This work was based on Stuart Hall's encoding/decoding model of the relationship between text and audience. This approach to textual analysis focuses on the scope for negotiation and opposition on part of the audience. ...read more.

His website which is a ongoing version is open to public opinions, criticisms and revisions, argues that participation, rather than consumption or production, will be the key organizing idea of the future society. Already, many web users, just putting their blogs, thoughts, 'out there' for anyone to decode and getting some momentum may possible create their own community or culture . Some find that new media projects take on a life of their own, and the content creator becomes stewards, librarian, editors and captain of their own new media ship, without the qualifications of being a journalist or a newsreader. People can read your blog, and get in touch with you. It may take time, but you could create a brand new community of like-minded readers, the future is blurry and frightening as the 'new cultural state' picks up momentum within this 'new media' era. words 3,036 Bibiliography Media and Communications Studies Website : http://www.aber.ac.uk/media/ Barthes, R. (1973) Mythologies. St Albans, Paladin. P109-158 Bignell, J.(2002) Media Semiotics. An Introduction. Manchester, Manchester University Press Boyd-Barret, O & Braham. P (1987) Media, Knowledge and Power. Kent, Open University Boyle, R. & Haynes, R. Football in the new Media Age. New York, Routledge Brunt. R (1992) Cultural Studies, New York, Routledge Leadbeater. C [available at] http://we-think.net Fiske, J. (1990) Introduction to Communication Studies. London, Routledge Hall, S. (1997) (ed) Representation. Cultural Representations and Signifying Practices. London, Sage. Horne, J. Tomlinson, A.& Whannel, G (1999) Understanding Sport. An introudcutin to the sociological and cultural analysis of Sport. London, E.F. Spon Independent[2008] available at : http://www.independent.co.uk/sport/general/tvs-great-viewing-mirage-768839.html Nicholson, M (2007) Sport and the Media. Butterworth-Heinemann Redhead, S. (2004) Creative Modernity: The New Cultural State: Media International Australia incorporating Culture and Policy, Volume 2004, Number 112, Rowe, D. (2004) Sport, Culture and the Media: The Unruly Trinity. Open University Press Telegraph[2008] available at : http://www.telegraph.co.uk/sport/football/european/championsleague/2965816/English-clubs-will-dominate-Champions-League-predicts-Karl-Heinz-Rummenigge.html The Guardian[2008] available at : http://www.guardian.co.uk/football/2008/may/23/manchesterunited The Daily Mail[2008] available at : http://www.dailymail.co.uk/sport/football/article-1021334/Sir-Alexs-champagne-cavaliers-class-68-shade.html The Daily Star[2008] available at : http://www.thedailystar.net/story.php?nid=37767 Williams, K. (2003) Understanding Media Theory. London, Arnold Ch6 ...read more.