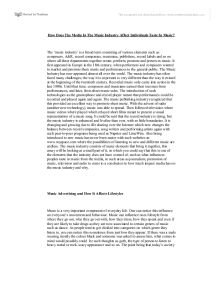 How Does The Media In The Music Industry Affect Individuals Taste In Music? The 'music industry' is a broad term consisting of various elements such as composers, A&R, record companies, musicians, publishers, record labels and so on where all these departments together create, perform, promote and preserves music. It first appeared in Europe in the 18th century, when performers and composers wanted to market and promote there music and performances to the general public. The Music Industry has now appeared almost all over the world. The music industry has often faced many challenges; the way it is at present is very different than the way it existed at the beginning of the twentieth century. Recorded music only came into action in the late 1800s. Until that time, composers and musicians earned their incomes from performances, and later, from sheet music sales. The introduction of such technologies as the gramophone and record player meant that performances could be recorded and played again and again. The music publishing industry recognized that this provided an excellent way to promote sheet music. With the advent of radio (another new technology), music was able to spread. Then followed television where music videos where played which relayed short films meant to present a visual representation of a music song. It could be said that the record industry is dying, but the music industry is enhanced and livelier than ever, with so little boundaries. ...read more.

They recruited 14,341 people, mainly teenagers to visit a website which was an artificial music market with 48 unknown songs by unknown bands. Applicants in one group were given only song titles and band names as their guide. Other applicants could also see how many times each song had already been downloaded. Participants could listen to songs, rate them, and then decide whether to download them. However participants who could see how often a song had been downloaded tended to give higher ratings to the songs that had been downloaded the most, and were then more likely to download those songs themselves. The researchers found that popular songs were then more popular and, unpopular songs less popular, in the groups where participants had access to other people's opinions. Though the particular songs that became very popular were less predictable. "In general, the 'best' songs never do very badly, and the 'worst' songs never do extremely well, but almost any other result is possible," (The Research Journal Science, http://www.columbia.edu/~mjs2105/research.html, 10/03/07) It could be argued that this research is only useful for deciphering the relationship between individual and group behavior. However this links in with music media and how they promote there music. As the research results show people tend to like what other people like. Music can be advertised in many ways, one where it expresses groups similar taste in music, for example being played or talked about on there favorite radio station, magazines, music channels, TV programs, and festivals. ...read more.

Music seems to take a similar approach as fashion does to attract there audiences. Each season there is a fashion show to show shops, celebrities, designers and so on, what is going to be in fashion and what is not and from there the shops will sell what they were advised to and people buy what they have been told to. Advertising works in the same way as fashion shows, and decides what genre people will listen to and what they normally follow is what they have been advised to listen to. Although music reviews are the expression of an individuals opinion and it is there own right to do that, I do not believe music reviews serve a very important purpose. People are entitled to their own opinion but how can someone criticise something which is so important to whoever has made it just so everyone knows there opinion. I do believe that advertising is important as it introduces people to new music without asking for it, as music is played virtually everywhere. However it can sometimes be rammed down society's throats as what is and is not cool to listen to. Everyone in there own right should like and not like whoever they want and not be criticised for it. Overall the music media has many positive and negative points to it and it needs to find a balance as it is pushing their opinions onto others. ...read more.