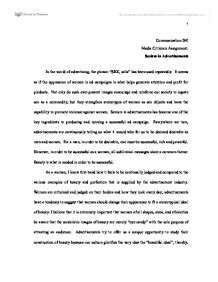 Communication 260 Media Criticism Assignment: Sexism in Advertisements In the world of advertising, the phrase: "SEX, sells" has been used repeatedly. It seems as if the oppression of women in ad campaigns is what helps generate attention and profit for products. Not only do such ever-present images encourage and reinforce our society to equate sex as a commodity, but they strengthen stereotypes of women as sex objects and have the capability to promote violence against women. Sexism in advertisements has become one of the key ingredients to producing and running a successful ad campaign. Everywhere we turn, advertisements are continuously telling us what it would take for us to be deemed desirable as men and women. For a man, in order to be desirable, one must be successful, rich and powerful. However, in order to be successful as a woman, all subliminal messages share a common theme: Beauty is what is needed in order to be successful. As a woman, I know first-hand how it feels to be continually judged and compared to the various examples of beauty and perfection that is supplied by the advertisement industry. Women are criticized and judged on their bodies and how they look every day; advertisements have a tendency to suggest that women should change their appearance to fit a stereotypical ideal of beauty. ...read more.

ads" (Frith, Shaw, 2005, pg. 57). Sexist advertisements have the power to objectify women's view on her body image, simply because they reinforce insecurity and uncertainty in women about their bodies. As stated in Psychology of Women Quarterly, "exposure to thin-ideal advertisements increased body dissatisfaction, negative mood, and levels of depression and lowered self-esteem" (Bessenoff, 2006, p. 239). As a result of advertisements that promote the idea that in order to be the object of man's affection, she must become an unrealistic entity that embodies a conceptualized, fictional, and sometimes unattainable figure. In her film, Jean Kilbourne suggests that women are constantly sexualized; however, it is the "dismemberment" of the female body that is one of the biggest problems in advertising (Killing Us Softly 3, 2002). Such advertisements have the ability to support the idea that women should view their bodies in separate and unequal pieces, rather than a unified whole. Kilbourne also discusses the fact that sexist advertisements continuously exploit women and negatively effect the way men view women. Such advertisements suggest that women must have a specific degree of beauty; this in turn may cause some insecurity in a consumer, prompting them to buy a specific product. ...read more.

Some women compare themselves with the idealized images in advertising and that some women who compare themselves with highly attractive models may experience negative feelings as a result (Bower, 2001, pg. 51). Sexist advertisements are a prominent and popular aspect of the American culture. Not only do sexist advertisements have the power to intrigue potential consumers, but they have the power to have an influence on the viewers' self-image. It is safe to say that there is no easy solution to ending sexism in advertisements. Because sexuality is such a huge factor in gaining the attention of possible consumers, it would be hard to image an industry without it. However, I honestly believe that it is possible to positively promote and launch successful advertisement campaigns that do not capitalize off of the over-sexualized female body. One such example is the "Campaign for Real Beauty" by Dove. The company embarked on a globally integrated marketing campaign that told women and young girls that they are beautiful and perfect just the way they are; they also defied decades of advertisement strategies by using women off of the street rather than professional models. If there were more advertisements similar to this campaign, rather than advertisements that capitalize off of women, societal standards would be taking one step in the right direction to effectively putting an end to sexist advertisements. ...read more.