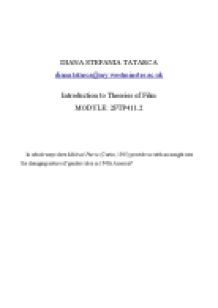 &quot;Mildred Pierce&quot; and the changing nature of gender roles in 1940s America

﻿ Introduction to Theories of Film MODULE: 2FTP411.2 In which ways does Mildred Pierce (Curtiz, 1945) provide us with an insight into the changing nature of gender roles in 1940s America? The fourth decade of the nineteenth century started on the battlefield, in the middle of a clash for power. The armed conflict strengthened the ideological and political differences between nations, which had been subtly expressed until this point through culture and civilisation. One of the most poignant approaches of revealing or irreversibly distorting the reality of war was through the use of celluloid. Films, apart from being visually arresting, are also capable of framing and sculpting a low-relief of a country's specific. Cinema encloses distinguishable traits which illustrate the social fresco, describing the changing nature of genres within film history and of genders within historical backgrounds. One of the targeted countries during the conflagration was USA, which was influenced by the the aftermath of the war in an unexpected way. The particularities of the American status, which recommended its citizens as cinephiles, sovereignty enthusiasts and aficionados of the idea of ?self? were moulded by the unforeseen demands of the war. Besides the crisis which emerged in the emotional sphere, as the ferocious war amputated parts of the family apparatus, the revolution of the female rank both at home and in the society became a confusing situation. The women who until that turning point religiously ?performed their gender?[1] according to an unwritten dogma commonly started to refine their beliefs. ...read more.

In Phantom Lady (Robert Siodmak, 1944), the male protagonist is the victim who is helped by his secretary, who plays the role of the detective. In The Dark Corner (Henry Hathaway, 1946), the investigator is saved by the killer's wife and in both The High Wall (Curtis Bernhardt, 1947) and Woman on the Run (Norman Foster, 1950), the women are the investigators. In some films the women were victims, which contrasts to well-known representation of the fetishised femme fatale: in Murder Is My Beat (Edgar G. Ulmer, 1955) and The Accused (William Dieterle, 1949), the woman is falsely convicted by the police. Initially, Mildred Pierce constituted a phenomenon as a connection between 'Woman's Picture' and 'Man's Film' ? a clash of the two 'voices', female and male.[4] ?Hybrid between the investigative thriller and the 'women's-picture' melodrama?[5], the fact that the motion picture crosses genres restates the duplicity which transpires throughout the film. Moreover, this distribution of the melodrama discourse and the purity of the film noir character in Mildred's flashbacks reinforce the idea of confusion and fluctuation of elements. The ambivalence of the narrated story mirrors the same nature for the characters' attributes and for their gender identity, assertion supported by Pam Cook in ?Duplicity in Mildred Pierce?[6]. The duplicitous pattern is visually suggested through the use of contrasting lights and shadows whereas the director's intentions to lead the audience to the belief that Mildred is the murderer are clear from the film's debut. ...read more.

As a conclusion, I consider that Mildred Pierce's popularity and relevance in the course of the past two centuries is a direct result of its approach of dealing with questions of eros and the mantle of gender. The roots of the plot are unquestionably factual and the staging of the paternalistic play, in which the man is emasculated and the woman is virile shows a need of reconstructing the family on new coordinates.[20] The film reconsiders the elements present in James M. Cain's novel, keeping the overall lack of love and the character's will to control people[21], but intellectualising the simple plot, which can be reduced to the following sentence: ?Mildred's place is in the kitchen and the bedroom with her husband?.[22] The film's organisation of the narratives according to advanced techniques and the existence of the female's voice over does support the feminist movement, but not entirely. In the end, the truth cannot be revealed by the womanly entity, but by the paternalistic detective. The blinds are opened and the light comes in, which does not only symbolise truth, but masculinity as well, therefore the defeat of the matriarchy.[23] This concept is reinforced by the final shots in which the building's cleaning-women are on their knees scrubbing the floor.[24] Mildred Pierce is indeed a step forward both cinematically and politically, but it represents only the first flame of the conflict which build around problems of gender equality. Mildred, like any American woman of the 1940s, succeeds in asserting her independence but she is silenced to validate the noir specific[25], not allowing her to disrupt or displace[26] the values of the puritan family. ...read more.