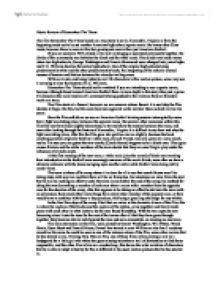 Movie Review of Remember The Titans

Movie Review of Remember The Titans The film Remember The Titans based on a true story is set in Alexandria, Virginia is from the beginning made out to be yet another American high school sports movie like many other films made, however there is more to this feel good sports movie than just American football. If you are unaware 1971 played a vital role in bringing a separated community together, the divide of the community was between the black and the white races. This divide was made worse when two high schools; George Washington and Francis Hammond were changed into junior highs and T.C. Williams became the senior high school. One of the original high schools being predominantly white and the other predominantly black, the integrating of the schools created masses of tension and friction between the already rivalling races. With an all-star cast being linked to real life characters in this motion picture, some may see it as trying to alter the history of T.C. Williams. Remember The Titans should not be watched if you are intending to see a sports movie, because although based around American football there is more depth in this story then just a game. ...read more.

he will be making an effort to unite the team as one before the end of the camp, his method for doing this was by making a member of each race share a room with a member from the opposite race for the duration of the camp, after this appears to be taking no effect he delivers the team with an ultimatum; they could either learn things from every other member of the opposite race, or they would have to continue with three-a-day practices, this being a gruelling challenge for any athlete. In the final few days of the camp I feel that we arrive at the dramatic climax of the film, this is where the captain of the blacks and the captain of the whites, come together and finally make peace with each other in what looks to be the new found friendship. With the two captains now becoming close it sets the tone for the rest of the teams after all that they have gone through together, they become able to look beyond the race and now concentrate on winning as one team. ...read more.

Harbor starring Ben Affleck and Josh Hartnett, to name a few of his 70 titles, this isn't the first film that Jerry Bruckheimer has made that has been brought upon by real events some of his other films that he has made that had been based on true stories are King Arthur and Pearl Harbor, however Remember the Titans is in a different genre to these two films because it is the only film out of the three films that hasn't been based around war. After watching this film it instantly became one of my favourite films of all times. I found it a truly inspiring film, my reason for this being such a good film in my opinion is because it highlighted issues that although not as blatant can still be found today 35 years on, my only problem with the film is that like all sports movies it is highly predictable, but in contrast to this a positive point on the film is that although a racially motivated film, they has toned down the racial epithets and no highly regarded racial word is used in the film against either the blacks or the whites. ?? ?? ?? ?? ...read more.

The level of writing is quite poor, with the main weakness of relying on over-long sentences that uneasily conflate a bunch of different ideas into one messy whole.

The level of analysis is fairly poor, too. The main error is in focussing the analysis upon the wrong thing e.g. several paragraphs are wasted listing the other films in which the main actors have appeared. In the context of such a short piece of writing, this is not a wise approach. At the very least, there should have been a clear reason for naming all the other roles, something that helped to elucidate the roles these actors play in THIS movie.