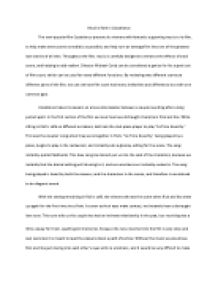 ï»¿Music’s Role in Casablanca The ever-popular film Casablanca presents its viewers with fantastic supporting music to its film, to help make every scene as realistic as possible, and help turn an average film into one of the greatest love stories of all time. Throughout the film, music is carefully designed to enhance the effects of each scene, and helping to add realism. Director Michael Curtiz can be considered a genius for his superb use of film score, which can be used for many different functions. By reviewing two different scenes at different parts of the film, we can see how film score had many similarities and differences but with one common goal. Casablanca takes its viewers on a love rollercoaster between a couple reuniting after a long period apart. In the first section of the film we meet two love distraught characters: Rick and Ilsa. While sitting in Rick’s café on different occasions, both ask the club piano player to play “As Time Goes By.” This was the couples’ song when they were together in Paris. “As Time Goes By,” being played by a piano, begins to play in the restaurant, and instantly sets a gloomy setting for the scene. ...read more.

The viewers get to see Rick and Ilsa?s last moments together before she departs. Ilsa does not want to leave, but behind Rick?s better judgment he sends her anyways. When Rick tells the man to make the plane tickets out to a Mr. and Mrs. Laszlo, instantly a very uneasy, heartbreaking-type tune begins to play. This tune tells us the couple?s time together is over. Ilsa begs to stay with Rick, but he refuses and tells her she must get on the plane. Throughout their conversation the tune slowly turns into a very sad love tune. Without even watching the scene, the music being portrayed could bring a gloomy feeling to your body and tears to your eyes, simply because it is such a depressing tune. Without the use of this, it would be like an ordinary breakup scene that is viewed in thousands of movies daily. Rick tells Ilsa, ?We will always have Paris,? and the music seems to become even more extreme. It cuts out while Rick converses with Victor Laszlo, but resumes as Rick watched the couple walk away, and out of his life. The music perfectly fits as we see tears streaming from Ilsa?s eyes. This melody helps us predict that this could be the end of Rick and Ilsa, forever this time. ...read more.

Although romance makes the two clips very alike, there also is a strong difference between them. Clip #1 takes place in Rick’s Café, and “As time goes by” is mostly what we hear. Because this is also heard by the characters in the movie, this clip is composed of mostly diegenic sound. But meanwhile in clip #2 emotions are conveyed mostly through instrumental ways, meaning the viewers are the only ones that hear it. This is the most common type of background music. We can easily see how big of an impact film music had on the film Casablanca. This romantic film demonstrated extraordinary use of film music to tap into the viewers emotions, and get them connected to each scene. Casablanca takes it to the next level, and is considered to be one of the greatest films of all time. Other directors have tried to reproduce Casablanca, but no one has had any success, simply because the director created a masterpiece of film music. And if the year this film was made (1942) is taken into effect, knowing how little technology they had compared to today, the film is even more impressive. For any movie lovers Casablanca will always be toward the top of their list, simply from the profound use of background music demonstrated throughout. ...read more.