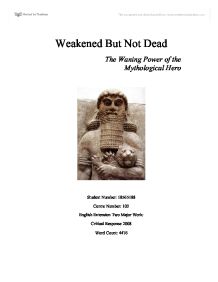 My essay will analyse the heroes in the following four texts, The Epic of Gilgamesh[68], The Odyssey[69], Mulan[70] and Where the Wild Things Are[71]. These texts were chosen as they differ significantly in context, culture and form. This investigation re

Weakened But Not Dead The Waning Power of the Mythological Hero Student Number: 18565188 Centre Number: 103 English Extension Two Major Work: Critical Response 2008 Word Count: 4476 We live a storied existence and the mythological hero entrenched in myths are vital to humanity for the reproduction of values and the evolution of civilisation. They inspire each subsequent generation and embody our ideals. Mythological heroes serve as idealised constructions expressing "a deep psychological aspect of human existence"1, reflecting and shaping cultures by embracing ethnocentrism and the dominant culture. However, the established heroes of the past such as Gilgamesh2 and Odysseus3 are no longer prevalent in the stories we tell ourselves today. Instead, what we do have are attenuated heroes who manifest heroic tendencies that reflect our own fragmented and hero-less society. Unlike the mythological heroes who undertook long and arduous journeys of self sacrifice and valour, the heroes in modern stories lack the internal fortitude, determination and patience required to undertake such quests. Their weakened status can be associated to the literary form they embody. On the one hand, myths encompass universal truths that are the foundation for human experiences and are of epic proportions. Stories, on the other hand, are generally fictitious and do not usually survive the test of time. The Epic of Gilgamesh4 and Homer's The Odyssey5 are two of the purist hero stories available to well-educated readers. But what do these texts tell us about heroes if we do not read them? Nothing! Hence my reason for choosing two contemporary texts, the film Mulan6 and the picture book Where the Wild Things Are7, that are widely available to both adults and children today. Mulan and Max (the "hero" in Where the Wild Things Are) are not Archetypal Heroes as such but they do reveal heroic tendencies that embody our ideals and values. Although heroes are still alive, even in a weakened form, they are indeed on life support! ...read more.

This significant elixir is not mirrored in texts such as Mulan. She receives the tangible reward of a necklace with the crest of the Emperor, the highest honour and is told, "The world will know what you have done for China". However, this heroic boon loses its significance as previously mentioned, she returns home to her family. Instead of continuing on her quest for gender equality in Ancient China by "transgressing the gender divide"52, she conforms to her societal role. This is an explicit example of how modern stories lack the mythological heroic qualities and substance found in texts such as The Epic of Gilgamesh. In Where the Wild Things Are, Max's journey commences when he is told by his mother to go "to bed without eating anything"53 as a result of his mischievous behaviour. He is emotionally blind, believing his mother's love has disappeared. Moreover, he returns from his quest knowing that the imbalance which sent him on his journey is corrected. This is portrayed in the final scene of the book where his mother left "his supper... and it was still hot"54. Order is restored as mirrored in the various lunar stages. It is originally crescent shape but as his balance is restored, it progressively becomes full and perfect. Here, the child's journey is concerned with his egocentric stage of development as it is an inner journey of discovery and identity more so than a quest. In comparison to the ancient epics, this text demonstrates a hero of another kind. Max takes a journey that each individual must take through apparent dangers to a safe homecoming, not unlike Odysseus. The waning power of the mythological hero in modern texts is evident through the lack of certain qualities such as sacrifice and even self-sacrifice. The adversities and trials that must be conquered can often result in death or near - death experiences. The notion of self-sacrifice is a predominant theme in Western culture based on the Bible. ...read more.