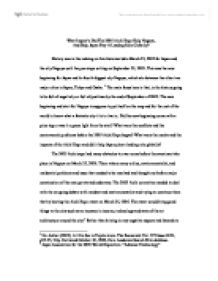 What Impact's Did The 2005 Aichi Expo Help Nagoya, And Help Japan Play A Leading Role Globally? History was in the making on this historical date March 25, 2005 for Japan and the city Nagoya until the pen stops writing on September 25, 2005. This was the new beginning for Japan and its fourth-biggest city Nagoya, which sits between the other two major cities in Japan, Tokyo and Osaka. 1 The main focus here is that, is the history going to be full of negativity or full of positives by the end of September of 2005. The new beginning and start for Nagoya is suppose to put itself on the map and for the rest of the world to know what a fantastic city it is to live in. Did the new beginning come with a price tag or was it a green light from the start? What were the conflicts and the controversial problems before the 2005 Aichi Expo began? What were the results and the impacts of the Aichi Expo and did it help Japan play a leading role globally? The 2005 Aichi expo had many obstacles to over come before the event can take place in Nagoya on March 25, 2006. ...read more.

With the new technology advancement they would have to destroy parts of nature to accomplish this goal. But as well, the committee has to acknowledge the concerns about environmental issue, technological and cultural concerns about local and global development.12 The advancement technology that Japan has in store for the future way of living is unbelievable. The advancement technology includes transportation, top notch facility to make the environment a cleaner place and for future plans on how to live a sufficient life without much pollution.13 "The new transportation system install would be a big improvement for the residents to travel from place to another. Some new installment includes the Multimode Transportation System (IMTS) vehicle, the fuel cell hybrid bus (FCHV), and the Linimo. With the Multimode Transportation System (IMTS), it is an independent operation system like a normal bus, high speed, the capacity of passenger is 50 and its convenience of not having to transfer multiple vehicles. Has a glass structure cabin giving it a panoramic field of vision and is field with clean compresses natural gas. The fuel cell hybrid bus (FCHV) runs on motors powered high-pressure hydrogen supplied fuel cells and a nickel metal hydride secondary battery. ...read more.

Nagoya, one of the few regions outside of Tokyo, where business and economic growth is rising steady not like many other places that seems to be stagnant or declining.21 Nagoya and Japan are benefiting from the Chubu airport because Toyota is planning on moving one of their headquarters from Tokyo to Nagoya. Thus, increasing and bringing more business to Nagoya.22 With any major event that is held domestically or internationally it comes with its pros and cons. But definitely the 2005 Aichi Expo helped out Japan and Nagoya in the long run and it has boosted its confidence on their advancement of technology. Japan will continue to dominate and play a huge role leading the economy and globally in their advancement of technology. As we speak Japan is developing human like robots that can do our everyday chores. Such as, floor cleaning robots, garbage collecting garbage, security robots, guide robots, child-care robots, and next generation wheel chair robots.23 This is just a recipe for disaster, creating human like robots for the reason being that this will make children and adults lazy, eventually leading to unhealthy diets which then lead to obesities. None the less, Japan's advance technology will catch on around the world and thus making Japan a powerhouse in their field of expertise. Japan and Nagoya is carrying out the theme "Nature Wisdom", keeping it a sustain environment. ...read more.