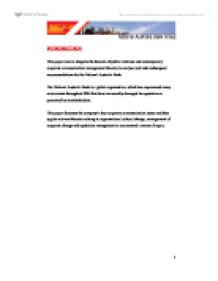 INTRODUCTION This paper aims to integrate the theories of public relations and contemporary corporate communication management theories to analyse and make subsequent recommendations for the National Australia Bank. The National Australia Bank is a global organisation, which has experienced many crisis events throughout 2004 that have irrevocably damaged its reputation as perceived by its stakeholders. This paper discusses the company's key corporate communication issues and then applies relevant theories relating to organisational cultural change, management of corporate change and reputation management to recommend a means of repair. RESEARCH Secondary research was undertaken to complete this paper through magazine articles in business publications and the financial services industry publications. The corporate communication theories throughout the paper were derived from numerous textbook extracts and journal articles, which focus on core public relations theories and contemporary theories within corporate communication management. KEY MANAGEMENT & CORPORATE COMMUNICATION ISSUES Undeniably, the National Australia Bank (NAB) has experienced numerous negative events throughout the year, which have resulted in dire consequences on the organisation internally, externally and in relation to its many stakeholders. Such events include: 1. Foreign currency trading scandal 2. Banking industry regulatory agency's weakness in supervisory role 3. Senior Management and Board of Director resignations 4. Tax scandal in Ireland 5. NAB employee charged with money laundering 6. Chief Executive John Stewart being evasive on blueprint to fix NAB Each of these occurrences has produced significant media exposure in a negative context and has also strongly effected NAB's global reputation, internal corporate culture and its financial profitability. The most recent media exposure for NAB is a BRW article written by Adele Ferguson dated 7th October 2004 (please see Appendix 1). The article highlights many corporate communication issues the company faces along with its recent management changes. The article also identifies the strategic direction proposed by the bank to ensure its future success. Aspects of the strategic direction proposed include a complete over-hall of the bank's organisational culture with the aim of eliminating the slow and bureaucratic processes that currently hinder effective customer service. ...read more.

So there are different ways and different strategies we can employ to do that. And what is the potential to be created by disposal of any of the businesses, and checking that we are making the right decisions," he says. But he will need to use more than just words on that day if he is to convince the market that he has what it takes to put the bank back on a path to growth. In the past 18 months, shareholders have seen more than $10 billion wiped from the company's market capitalisation, they have suffered seven big profit downgrades, a $360-million foreign exchange scandal, a draconian set of conditions from the financial services regulator, 70% turnover in the bank's board and senior management, poor performance from its British and Australian operations and quantifiable damage to its brand. If Stewart's strategic vision shows any signs of weakness, if he decides not to attach a detailed timetable and financial targets to his strategy, if the write-downs are deemed to be too timid or the outlook for 2005 is worse than expected, Stewart's dream of fixing NAB and gaining the respect of staff and investors will be seriously damaged. "The most likely time [for giving a timetable and financial targets] is at the results presentation. But I'll have to think about that one. It will depend on the degree of confidence. APPENDIX 1 - BRW ARTICLE cont. I can understand why shareholders like these targets. But some of the things we are dealing with, it is very difficult to be precise on that timeline," he says. Stewart is in a quandary. If he decides to give himself some elbowroom, he will send a message that the bank's problems have not yet stabilised. Most chief executives in similar positions have been bold and put timeframes on their financial targets. Even John Fletcher, who inherited a similar mess at the country's biggest retailer, Coles Myer, and who had never worked in the retail industry, set goals, such as achieving an $800-million profit by 2006. ...read more.

And what is the potential to be created by disposal of any of the businesses, and checking that we are making the right decisions." GET APRA OFF ITS BACK 6 After the $360-million foreign exchange scandal, NAB lost its licence to trade forex options. The Australian Prudential Regulation Authority (Apra) followed with an 87-page report on the scandal, and demanded that the bank smarten up its risk management and corporate culture. It prescribed 75 separate remedial actions, and in effect put the bank on probation until it shows it can be trusted to run a currency options trading desk. One of the key demands was a move to force NAB to increase its total capital adequacy ratio from just over 9% to 10%, which immediately prompted the bank to abandon its share buyback to preserve capital. It raised $2 billion from a subordinated debt issue and $1.2 billion through an equity issue. Apra also forced the bank to abandon the internal model for calculating risk-weighted assets. Until NAB gets Apra off its back and is able to manage its own business, the bank will be constrained in what it can do. APPENDIX 2 - MEASUREMENT & EVALUATION Watson's Measurement and Evaluation in the Planning Cycle Diagram illustrates the steps required to effectively plan, implement and evaluate changes within an organisation. Due to NAB's focus on a long-term organisational program rather than a short-term campaign, it is recommended that NAB utilize an evaluation tool to measure the progress of its corporate change strategy. Measurement & Evaluation in the Planning Cycle Stage Details Stage One - Audit Where are we now? Existing research & benchmarks reviewed Stage Two - Objectives Where do we need to be? Overall goals Stage Three - Strategy & Plan How do we get there? What level of measurement? Stage Four - Measurement & Evaluation Are we getting there? Should we start doing, continue or adjust? Stage Five - Result How did we do? Objectives met? Source: Watson (2002) APPENDIX 3 - STAKEHOLDERS ?? ?? ?? ?? 1 ...read more.