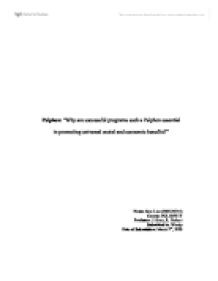 Nations today, most commonly such as China, Iran, and Burma has become infamous for their wide use of internet censorship and filtering within borders. This paper intends to focus on an open source program deemed the most sophisticated anticensorship prog

Psiphon: "Why are successful programs such a Psiphon essential in promoting universal social and economic benefits?" Name: Sara Liao (996129746) Course: POL108Y1Y Professor: J. Stein, R. Deibert Submitted to: Wendy Date of Submission: March 3rd, 2008 The technology industry has become one of the fastest growing industries in our society to date. With millions of users around the world and growing, the internet allows for information to be posted, transferred and accessed within seconds with the touch of a single button. However, despite its convenience and effectiveness for many, there are also many cons associated with internet use. The overwhelming amount of people using the web combined with the high traffic transactions of programs and files opens the doors to many criminal activities, including identity theft and child pornography. Some may argue that it was the emergence of these social problems that led to the first use of internet censorship. Internet companies and government officials began to filter out these illegal activities occurring on the web, setting a catalyst for the censorship of broader content in some countries. Nations today, most commonly such as China, Iran, and Burma has become infamous for their wide use of internet censorship and filtering within boarders. The content that is censored varies widely from website containing pornographic content to political opposition, blogging, religious minorities, or health information sites. For citizens in censored countries, the mere attempt of accessing these forbidden website holds severe consequences for anyone caught engaging in the act. However, complaisant to the popular statement "every cloud has a silver lining", the silver lining to the growing problem comes in the form of the development of open source software that allow citizens in censored countries to circumvent the restrictions placed on the web via connections through computers of citizens in liberal countries. This paper intends to focus on an open source program deemed the most sophisticated anticensorship program to date - Psiphon, while evaluating the importance of its success for the promotion of social and economic benefits. ...read more.

Open source software are often used by scholars in censored countries to access information by which is censored by the state, in which they are able to gather the proper information needed for their study. Many scholars in censored countries often find it difficult to conduct their study because some countries outlaw and censor searches under seemingly harmless words. For example, the word 'meat' is highly censored in Iran because of its alternative definition as 'pretty women' in Farsi, which could government officials fear is a search of pornographic web pages. This also leads to searches on Muslim dietary restrictions to be blocked.13 Although governments in censored countries have indeed attempted to shut down circumvention programs such as that of Psiphon or Tor, their attempts are halted at a certain point when shutting down open source software present an indirect confession that the government does indeed engage in the act of filtering. The open discussion of circumvention programs such as that of Psiphon can almost be openly discussed among citizens in China. Ronald Deibert, creator of the new open source software Psiphon, argued that if governments wanted to, they could regulate all transactions and censor all but a selected amount of websites. However, the act could put serious strain on the economy, such like that of North Korea's desolate economy, in which severe internet restrictions are placed.14 Leisure and censored scholarly websites, however, are not the only social benefits that arise from the success of Psiphon, but can also furthermore provide economic growth and benefits to the state. Recent studies have shown the symbiotic relationship between the growing use of the internet relative to the positively (growing) economy. The internet is cutting costs in every corner of the economy. It makes it cheaper to design products, reduces the need for vast inventories, and provides a cheaper alternative to the high costs of delivering many products and services.15 For example, e-commerce helps eliminate the need to keep large numbers of inventory in stock. ...read more.

As a result, exact address of the web page must be given to both raise awareness of the website and also to users who wish to access the site. Although the blog was extremely difficult to find in on the internet, the social innovation group did not anticipate a greater success with a blog involving facebook. Because Facebook is a social networking website, many of its users choose to post personal conversations on each others' web pages rather than promoting social and political campaigns. Although the website does allow for users to create groups of leisure, political, and social natures, many groups are unknown to users unless they are personally invited by a member or administrator. Due to the mass population of Facebook users, groups created by users are plentiful and can be difficult to locate, even under the site's search engine. Groups and blogs must also be heavily advertised to gain activity. Therefore, a user with a limited network may find it difficult to recruit members. As a result, like any revolution, the fight against internet censorship is not only dependant on awareness, but is also heavily dependant on the whether the aware population takes action against the problem. In conclusion, it is important to recognise that internet censorship takes place in many levels of severity, from parental controls to infringing on a citizen's right to freedom of expression. Although many successful open source programs such as Psiphon have been developed, the success of the fight against internet censorship heavily relies on the action taken by the world community. Because citizens in censored communities are bound by strict rules and laws, it is up to the citizens of liberal countries to help them liberalize internet use. The fight against internet censorship is heavily dependent on the dual relationship between users from both liberal and censored countries. Censored users need aiding while liberal users have the power to aid. Without this relationship, the fight against internet censorship is likely to suffer great setbacks in the goal of creating a liberal internet community for all. ...read more.