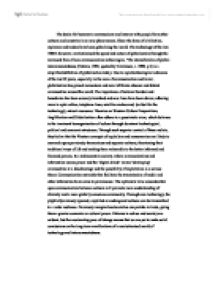 The desire for humans to communicate and interact with people from other cultures and countries is no new phenomenon. Since the dawn of civilisation, explorers and traders have been globalizing the world. The technology of the late 1900's however, revolutionised the speed and nature of globalisation through the increased flow of new communication technologies. 'The intensification of global interconnectedness,'(Mcrew, 1995, quoted by Tomlinson, J. 1999, p 2) is a simplified definition of globalisation today. Due to rapid technological advances of the last 20 years, especially in the area of communication and travel, globalisation has gained momentum and now infiltrates obscure and distant communities around the world. The importance of national borders and boundaries has been severely tarnished and new lines have been drawn, adhering more to optic cables, telephone lines, satellite reaches and, (as fuel for the technology), natural resources. Theories on Western Cultural Imperialism, Anglification and Globalisation often adhere to a pessimistic view, which believes in the imminent homogenisation of culture through dominant technological, political and economic structures. Through such superior control of these outlets, they belive that the Western concepts of capitalism and consumerism are likely to encroach upon previously harmonious and separate cultures, threatening their traditional ways of life and making them vulnerable to the better informed and financed powers. In a technocentric society, where communications and information means power and the 'digital divide' leaves 'developing' communities at a disadvantage and the possibility of exploitation is a serious threat. ...read more.

The disparity in access to information and technology distribution is intrinsic to this scenario, with a kind of global hierarchal structure, America and the West being dominant. American Marxist media theorist Herbert Schiller pressed the case that through transnational corporations' (most being American or from the west) the 'homogenised north Atlantic cultural slop' (Shiller 1985, quoted by Tomlinson, J. 1999, p 81) of American culture is imposed upon the rest of the world. Some policies of US governments have challenged other countries use of governmental control or regulations, in favour of more US-friendly and profitable means, effectively altering the societal evolution of the countries. Most of this is facilitated through their access to superior access to technology in all areas from intelligence, media, Military arms, and trade market force. The most recent example of this is occurring right now, in Iraq. Under the guise of liberation, democracy, global justice and security, the U.S plans to implement a more America friendly democracy in place of the Saddam's Anti-American party. John Ikenberry, well known international affairs specialist, notes America's 'grand strategy that begins with a fundamental commitment to maintaining a unipolar world in which the United States has no peer competitor." (Quoted by Chomsky, N, 2003, p 11) A clear example of an effort to impose hegemony in government control and ensure proliferation of the 'New World Order' of today. ...read more.

Similarly, through increased information flow, the marginalised, remote, poor and threatened cultures are invited into our living room or office to have their voice heard. Increased communication and influence doesn't necessarily result in uniformity of masses. The strength and power of religions such as Islamism and the resurgence of patriotic nationalism are two examples of many that have resisted and even thrived upon the threats of homogenisation. While western influence can infiltrate even the most remote African village, it is an insult to a community's integrity, intelligence and culture to assume that they will adopt it. Many millions of cultures and tribes around the world choose live in relative autonomy irrespective of the changes in the world around them. Tribalism and traditional ways of life are still dominant in regional areas of countries whose governments subscribe to Western or capitalist culture. The dynamic nature of the concept of culture and tradition itself relies upon varying degrees of influence and connectivity. While technology, communications and media have influence and a varying degree of control, the elimination of tradition is unlikely for those who have faith and loyalty in their culture or beliefs. For those, who have had tradition or culture thrust upon them by virtue of nationality or religion, the choices provided by technology may indeed inspire them to reject inappropriate or oppressive traditions in favour of an identity of their own. Individual strength and integrity shouldn't be underated, even in today's sensationalised climate of change. ...read more.