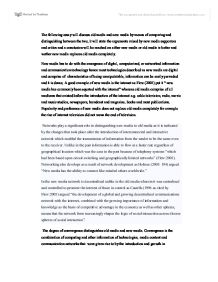 The following essay will discuss old media and new media by means of comparing and distinguishing between the two, it will state the arguments raised by new media supporters and critics and a conclusion will be reached on either new media or old media is better and wether new media replaces old media completely. New media has to do with the emergence of digital, computerized, or networked information and communication technology hence most technologies described as new media are digital and comprise of characteristics of being manipulatable, information can be easily pervaded and it is dense, A good example of new media is the internet as Flew (2005) put it " new media has commonly been equated with the internet" whereas old media comprise of all mediums that existed before the introduction of the internet e.g. cable television, radio, movie and music studios, newspapers, broadcast and magazine, books and most publications. Popularity and preference of new media does not replace old media completely for example the rise of internet television did not mean the end of television. Networks play a significant role in distinguishing new media to old media as it is indicated by the changes that took place after the introduction of interconnected and interactive network which enabled the transmission of information from the sender to be the same even to the receiver. ...read more.

The new media radically shapes the ways we interact and communicate with one another. Interactivity is central to new media, interactivity include radio and television talk shows, letters to the editor, listener participation in such programs, and computer and technological programming. In the old media interactivity was less as newspapers, television and radios did not consider the opinions and preferences of individuals because communication was a way conversation, a one- to- many. Thus people were given what the media thought is right for them but nowadays the degree of interactivity ha increased even though it does not necessarily mean that it every new media has some interactivity elements but mostly do as it is indicated by computers which can talk back these days, phones which comprise of handwriting recognition and so forth. Terry Flew (2005) argues that "the global interactive games industry is large and growing, and is at the forefront of many of the most significant innovations in new media" (Flew 2005: 101). Interactivity is prominent in the new media, developments of new media enables users to establish relationships and experience a sense of belonging, despite temporal and spatial boundaries. ...read more.

Making reference to properties of convergence, interactivity, networking, global reach, explore the difference between 'old' and 'new' media. Abstract We constantly hear terms like 'new' media and 'old' media, what exactly is 'new' media and 'old' media and what are the features which distinguish between the two, in exploration and discussion of the two it becomes clear and discernible that the new one is just the betterment of another one by giving more options to the user which was not given by the old one but as different as they are the new one does not completely replace the old one. Plagiarism Declaration I hereby declare that this is my original work, and that it has not copied or cited without relevant referencing. Signature and date: REFERENCE LIST Castells, Manuel, (1996) Rise of the Network Society, The Information Age: Economy, Society and Culture volume 1, Massachusetts, Blackwell Publishing Convergence: the International Journal of Research into New Media Technologies. http://con.sagepub.com Croteau, David & Hoynes, William (2003) Media Society: Industries, Images and Audiences (third edition), Pine Forge Press, Thousand Oaks. Flew, Terry and Humphreys, Sal (2005) "Games: Technology, Industry, Culture" in Terry Flew, New Media: an Introduction (second edition), Oxford University Press: South Melbourne. Holmes (2005) "Telecommunity" in Communication Theory: Media, Technology and Society, Cambridge: Polity. Slevin, James: New Media & Society. http://nms.sagepub.com ...read more.