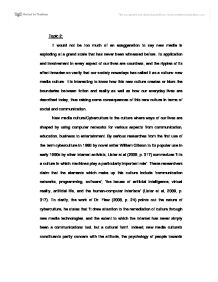 Topic 2: It would not be too much of an exaggeration to say new media is exploding at a grand scale that has never been witnessed before. Its application and involvement in every aspect of our lives are countless, and the ripples of its effect broaden so vastly that our society nowadays has called it as a culture: new media culture. It is interesting to know how this new culture creates or blurs the boundaries between fiction and reality as well as how our everyday lives are described today, thus raising some consequences of this new culture in terms of social and communication. New media culture/Cyberculture is the culture where ways of our lives are shaped by using computer networks for various aspects from communication, education, business to entertainment. By serious researches from the first use of the term cyberculture in 1986 by novel writer William Gibson to its popular use in early 1990s by other Internet activists, Lister et al (2009, p. 317) summarizes 'it is a culture in which machines play a particularly important role'. These researchers claim that the elements which make up this culture include 'communication networks, programming, software', 'the issues of artificial intelligence, virtual reality, artificial life, and the human-computer interface' (Lister et al, 2009, p. 317). To clarify, the work of Dr. Flew (2008, p. 24) points out the nature of cyberculture, he states that 'it drew attention to the remediation of culture through new media technologies, and the extent to which the Internet has never simply been a communications tool, but a cultural form'. ...read more.

Hence it pushes reality far away from the players, they merely find pleasant in the virtual environment which is just equipped by computer screen and a webcam. With the ubiquity of new media in our everyday practices, which has a strong impact on our current lifestyle, can we reckon things that we are accustomed to consume like reality TV, FaceBook profiles and online dating are realistic descriptions of our everyday lives? Scrutinize on the popularity of Reality TV, which is described by Lumby (2003), 'a hybrid of conventional information and entertainment program'. The name 'Reality TV' explains itself: it captures scenes from reality, the 'actor', who is not professional actor, is doing something that they are 'scripted' to do in an unusual situation, a special environment or an actual event. In reality TV, the 'actor' can be set to reach some targets: an obese boy is instructed by expert to run a weight-loss strategy (The Biggest Loser), a teenage girl is tipped to improve her appearance (Extreme Makeover) or a dancer wants to become famous (So You Think You Can Dance?). A very interesting thing about this kind of show, which answers why reality TV hooks the audiences, is that 'As soon as they get into an unreal situation, one could argue that it's scripted, because the situation is created by the producers. What makes it so compelling is that you never know what a real person's reaction to an unreal situation will be' (Thompson, 2009). Evidently, reality TV is not real, it is unscripted but bound by specific rules of the producers to assure the viewers' interest. ...read more.

Even in competition shows where participants fight against each other to survive, to some extent those shows promote 'a ruthless kind of social Darwinism, an ethic of survival of the fittest' (O'Shaughnessy & Stadler, 2009, p. 541), which is quite impossible to accept in society nowadays. Another point to critic on new media culture is that it blurs the sense of some culture aspects. For instance, library of city become a repository, a museum of book, citizen nowadays do not care much of reading books in library, instead, they deem that the treasure on the internet is always easy to find and trustworthy. This discrimination imperceptibly make society have a bias against library, a crucial unit of mass communication, a spokesperson for community culture, it is dimming the pure value of the so-called 'knowledge service provider and skill builders' (Henry, 2009, pp. 30-31). There is the lyric saying 'Too much of anything can make you sick, even the good can be a curse' (cited in Wilkins, W, Kipner, S & Merritt, A)*. As shown above, new media could be employed for very good and convenient purposes. However once being exploited, new media culture could turn against us by bluring the boundaries between fiction and reality. Instead of being served for mere communication and entertainment purpose, now new technology could very well be a prision trapping us in an illusionary world. To conclude, they can be somehow descriptions of our lives but absolutely cannot be considered as a substitute. People should be aware of the inflation of this new culture and not let them affect on the way we live, work and think. ...read more.