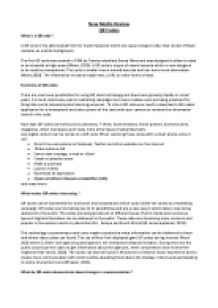 ﻿New Media Review QR Codes What is a QR code? A QR code is the abbreviated form for Quick Response which are square shaped codes that consist of black modules on a white background. The first QR code was created in 1994 by Toyota subsidiary Denso Wave and was designed to allow its data to be decoded at high speed (Wave, 2010). A QR code is a type of matrix barcode which is now designed to be read by smartphones. The code is smaller than a normal barcode and can store more information (Wave,2010). The information encoded maybe text, a URL or other forms of data. Functions of QR codes There are enormous possibilities for using QR code technology and have been growing rapidly in recent years. It is most commonly used in marketing campaigns but more creative uses are being produced for things like social networking and learning purposes. To scan a QR code you need to download a QR reader application for a smartphone and take a photo of the code with your camera to retrieve the information stored in the code. ...read more.

This technology is spontaneous and users maybe surprised at what information can be delivered to them and where these codes can found. The city of New York displayed giant QR codes during Internet Week 2010 where 11 New York agencies participated in the interactive billboard initiative. During this time the public could scan the codes to get information about the agencies, enter competitions and receive free ringtones (Van Grove, 2010). The codes can also be found in Museums to enhance visitor experience and to create more communication with visitors while educating them about the displays, history and participating in online interactive tours (Wheeler, 2011). What do QR codes demonstrate about changes in communication? Originally QR codes were used to track parts in vehicle manufacturing but are now being utilised in a completely different way (Wave,2010). This reflects how print media material has been adapted by mediatisation. The market of smartphones is growing faster than any other market and by 2014 it is expected that mobile web usage will overtake desktop web usage (Watters, 2010). ...read more.

The technology is gaining usage in the smartphone market but currently not all mobile phones are able to use QR codes. Smartphones like Android, Nokia, Blackberry handsets, and also the Nintendo 3DS, come with QR code readers already installed. Users can also create QR codes for their own purposes using online QR code generators ranging from basic free codes to costly premium codes (QR codes explained,2011). The QR reader software is available for most mobile platforms but is restricted to the smartphone market. According to a survey by BeQRious (2010) it revealed that 5 out of 10 people have heard about QR codes and that 3 out of 10 have scanned one. The survey also revealed that there were 13 times as many people scanning QR codes in December 2010, compared to those in January 2010. This reflects that the technology is gaining more awareness and more people are scanning QR codes, the market is still on the rise and is expected to become even more popular in the near future (Avivo, 2011). QR codes are becoming more useful and more codes are turning up in all kinds of places around the world. ...read more.