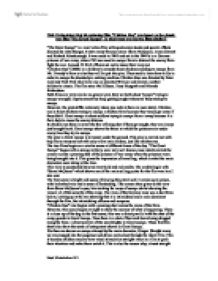 Nick Parks stated that his animated film &quot;Chicken Run&quot; was based on the classic war film &quot;The Great Escape&quot;. In what ways are the two films similar?

Nick Parks stated that his animated film "Chicken Run" was based on the classic war film "The Great Escape". In what ways are the two films similar? "The Great Escape" is a war/ action film with spectacular stunts and special effects directed by John Sturges. It stars many famous actors: Steve McQueen, James Garnett and Richard Attenborough. It was made in 1963 and set in the 1940's in a German prisoner of war camp, where 250 men need to escape from to distract the enemy from fight the war. Around 12 RAF officers set out to tunnel their way out. "Chicken Run" (2000) is a children's comedy about chickens needing to escape from Mr. Tweedy's farm or else they will be put into pies. They need to learn how to fly in order to escape the dreaded pie-making machine. Chicken Run was directed by Peter Lord and Nick Park who have also co-directed Wallace and Gromit, another children's classic. The film stars Mel Gibson, Tony Haygarth and Miranda Richardson. Both films are very similar on general plot, they are both about "people" trying to escape wrongful imprisonment but keep getting caught whenever they attempt to escape. However, the plots differ extremely when you look at them in more detail. Chicken run is about chickens trying to escape a chicken farm because they would get eaten if they didn't. Great escape is about soldiers trying to escape from a camp because it is their duty to cause the enemy distress. In chicken run there is never the fear of being shot if they get caught, they are always just brought back. Great escape shows the threat at which the prisoners are under every time they try to escape. The plan in Great escape is to tunnel under the ground. This plan is carried out with help from everyone but with only a few main leaders, just like chicken run. ...read more.

However, the four more intelligent chickens, Ginger, Rocky, Mac and Fowler are slimmer which helps you pick them out in a crowed scene. This is so that the children can distinguish the chickens in a chaotic scene. The characters in Great Escape use costumes to distinguish each other. The Germans all wear green uniforms whereas the senior British officers wear blue. The costumes in Chicken Run are to make the characters more personalised. Ginger has a small neckerchief and a bobble hat. The hat is very army styled which is a parallel to great Escape, especially as she is the first character we see whilst she is escaping and she has a dark green hat on. Rocky has a bright American style neckerchief which reminds the viewers of the parallel between him and Hilts in Great Escape. Mac has a tartan scarf to show that his accent is Scottish, which has the comedy element because the American can't understand a word which he says. He also has scruffy ginger feathers on her head like a stereotypical Scottish man, scraped back from his face by a headband. Fowler has a white flying scarf which shows his British aviation past and also has his top feathers scraped back like the stereotypical English pilot. All of the characters are very stereotypical. All of the other chickens have pearls like old wives (a link to women's institutes?). The locations were also very similar. Not only was there a camp in both but also a cooler. Also in the camp both film characters referred to the huts with numbers. "Coop17", "Hut 104". There were many other parallels running through Chicken run with Great Escape. For example there is role call in each where the farmer/commandant counts all of the chickens/prisoners. Also when the plan is being formulated in each the leader goes through the roles of each person/chicken. In Great Escape the planks of wood from the bed used as slats are taken from the bed to be used in the construction of the tunnel. ...read more.

The development in both is a plan to escape. In Great Escape the plan is to tunnel and all of them will help carry this plan out fairly equally. In Chicken run the plan is to fly over the fence and this can only be achieved with the help of Rock, who can "fly". Also, in Chicken run there is a threat introduced in the development. The pie machine is introduced and it becomes compulsory that they leave, otherwise they will be killed. The complication in Great Escape is then that one of their tunnels is found and many other problems with forging, dispersal and Danny trying to escape. Also in the complication it is found that the tunnel is 2ft short which results in the men being found escaping so not many men actually escape. In Chicken run the complication is that Rocky can't actually fly which causes the whole plan of escape to be entirely futile. Rocky then runs away leaving the chickens with no escape plan and Mrs. Tweedy builds the pie machine. The two films then completely differ in the climax. In Great escape the climax is the men scattering themselves around Germany, each trying to get home. Each has a different escape technique and the viewer is not sure which may escape because each plan seems to be failing. In chicken run the climax is the escape. The chickens decide to build a flying machine to help them escape. They attack Mr. Tweedy and Rocky comes back to help them escape. They fly over the farm with Mrs. Tweedy the "Clingon" dragging behind but then falling from them leaving the chickens home free. The resolution in Great Escape is the numbers of the dead, captured and escaped. They find out that only a few escape, some got recaptured but 50 were shot dead. Chicken Run ends on a completely different note. All of the chickens escaped and found paradise, a bird sanctuary. Rocky and Ginger get together and even the rats found a place to live. Steph Winterbottom 10D ...read more.

Though this conclusion is logical (in that the end of the essay describes the ends of the films), it is far from satisfying. What is missing is a brief summative paragraph, describing the causes and the essence of the differences and similarities that have been identified in the discourse.

On the whole, a very detailed account of the formal differences/similarities, but lacking in adequate reflection upon the aesthetic and ideological effects of the changes. Some of this kind of analysis is present, but to be truly satisfying the essay should have been driven by an overarching theory of what the most important changes/similarites are, and what these things mean.