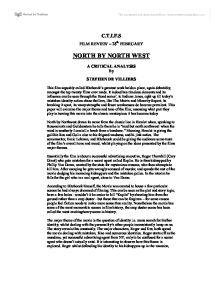 C.T.I.F.S FILM REVIEW - 28th FEBRUARY NORTH BY NORTH WEST A CRITICAL ANALYSIS By STEPHEN DE VILLIERS This film arguably called Hitchcock's greatest work holds a place, again debatably, amongst the top twenty films ever made. It indeed has timeless elements and its influence can be seen through the Bond series', to Indiana Jones, right up till today's mistaken identity action chase thrillers, like The Matrix and Minority Report. In breaking it apart, its many strengths and fewer weaknesses do become prevalent. This paper will examine the major theme and tone of the film; assessing what part they play in turning this movie into the classic masterpiece it has become today. North by Northwest draws its name from the classic line in Hamlet when, speaking to Rosencrantz and Guildenstern he tells them he is "mad but north northwest: when the wind is southerly I can tell a hawk from a handsaw." Meaning, Hamlet is giving the gullible Ros and Guil a clue to his feigned madness, and hi-jink antics. The screenwriter, Ernie Lehman, and Hitchcock could be giving the audience some taste of the film's overall tone and mood, whilst playing on the ideas presented by the films major themes. Essentially the film is about a successful advertising executive, Roger Thornhill (Cary Grant) ...read more.

as Roger/Kaplin will nearly learn. Attempting to clear his name, more probably trying to survive the next few days, Roger finds himself on a train bound for Chicago. On board he meets the very sexy Eve, who is herself playing more than one role. At first he pretends to be something isn't - in both his lives - so does she, introducing herself as a trade auditor or some such. This is an interesting commentary on the way we assume identities to get what we want. Eve takes the identity game even further. We soon learn that she is working for Van Damn but unbeknown to him she is also working for the Govt. Roger finally gives in to his agent persona as her learns of Eves true identity, and her imminent departure with Van Damn. His love for Eve drives him to her daring rescue. After a tense scene at Van Damn's HQ and on Mt. Rushmore, Roger and Eve get safely away. Roger or Kaplin, it doesn't matter because X is able to start a new life with Eve, being whoever he wants to be, with a clean slate. The theme and story of the movie lends itself to a number of possible tones. The movie could be a drama/thriller or action thriller, but rather, Hitchcock chose to make the movie predominantly comic. ...read more.

While exploring the theme it does, in the fairly successful way it does, the film in my opinion, lacks a certain amount of depth. Yet this depth is not required for this genre. For it's time the movie must have been revolutionary, but there have just been too many James Bonds made to almost kill the genre. Having said that the film is still incredibly entertaining, and watching Cary Grant pull off the suave, cool persona he does, like only Cary Grant can do, not to mention watching Eva Maria Saint doing pretty much anything all combine to make a truly very great escapist yet sophisticated film. It is a film that has had a lot of thought go into it. What depth the story lacks the, the performances and cinematic techniques more than adequately make up. It is a comedy/action/adventure with a difference. It chooses to confront an interesting theme. Whilst this theme has been delt with subsequently, and possible superiorly, North-by-North West gives us just enough. In my opinion this films tone "colour" is superb. Its wit surpasses most other films in its genre and the suspense, tension and characterisation are all unmistakably Hitchcock. I cannot judge it fairly against other Hitchcock films, but I can see why it might be considered his best and indeed in general one of the best films ever made. ...read more.