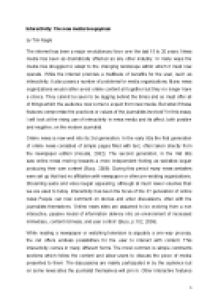 Online Journalism - I will look at the rising use of interactivity in news media and its affect, both positive and negative, on the modern journalist.

﻿Interactivity: The new media boogeyman by Tim Nagle The internet has been a major revolutionary force over the last 15 to 20 years. News media has been as dramatically affected as any other industry. In many ways the media has struggled to adapt to the changing landscape within which it must now operate. While the internet provides a multitude of benefits for the user, such as interactivity, it also poses a number of problems for media organizations. Many news organizations would rather avoid online content all together but they no longer have a choice. They cannot be seen to be lagging behind the times and so must offer all of things which the audience now come to expect from new media. But what if these features compromise the practices or values of the journalists involved? In this essay I will look at the rising use of interactivity in news media and its affect, both positive and negative, on the modern journalist. Online news is now well into its 3rd generation. In the early 90s the first generation of online news consisted of simple pages filled with text, often taken directly from the newspaper edition (Kiousis, 2002). ...read more.

And is this empowering the journalist or simply turning him into a facilitator of news? On Storyful journalists are even referred to as curators, a title many are likely to issue with. In a sense journalists may feel torn between traditional practices and rapidly changing expectations of what new media is or should be. For many journalists, the idea of the audience being given a forum to reply is an unappealing one. Some argue that untrained journalists should not be given a platform to publish uninformed opinion as it carries less weight. To these journalists opening up a news story for discussion is seen as devaluing the product as a whole and they simply do not want to spend time engaging with the audience or defending the views expressed in their articles. While this may be true of certain comment sections, such as Youtube, which includes an unusually large amount of racism, homophobia and other non productive content, it is not true unanimously across all media sites. For example, the comments sections of Guardian are often more enlightening and engaging than the articles themselves. It is possible, in these cases, that the journalists could feel intimidated. ...read more.

In my opinion keeping in touch with ones audience can only be a good thing. Many media organizations have made the move to the online sphere reluctantly. For a number of years they have been dipping their toe in the water rather than diving in. However, that period has now passed and media organizations are left with no choice but to dive in or be left behind. Journalists have had to turn their back on more traditional forms of content generation and adapt to the new demands of the industry. Interactivity is definitely here to stay and while it does pose certain problems, I believe it will be a positive element of news media in future. Websites like The Guardian do an excellent job of engaging with their audiences and as a result I believe they have gained credibility as well as tapping into new and younger audiences. It is up to news organizations to find new ways to change along with technology and journalists simply have to accept that. Audiences will no longer accept the passive storytelling experience and why should they? Traditionally journalists are seen as the watchdog of the people ? in a way, now the people can be seen as watchdogs of the journalists. While this is something which may make some journalists uncomfortable there is no avoiding it in the new media age. ...read more.