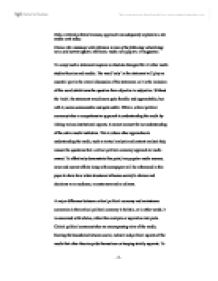 Only a critical political economy approach can adequately explain how the media work today.

Only a critical political economy approach can adequately explain how the media work today. Discuss this statement with reference to two of the following: advertising; news and current affairs; television; radio; newspapers; or magazines. To accept such a statement requires an absolute disregard for all other media studies theories and models. The word 'only' in the statement will play an essential part in the overall discussion of the statement, as it is the inclusion of this word which turns the question from objective to subjective. Without the 'only', the statement would seem quite feasible and approachable, but with it, seems unreasonable and quite unfair. While a critical political economy takes a comprehensive approach to understanding the media by linking various institutional aspects, it cannot account for our understanding of the entire media institution. This is where other approaches to understanding the media, such as textual analysis and content analysis help answer the questions that a critical political economy approach to media cannot. To effectively demonstrate this point, two popular media sources, news and current affairs along with newspapers will be referenced in this paper to show how wider structures influence society's choices and decisions as an audience, as customers and as citizens. ...read more.

To provide an example of the critical political economy approach in relation to news and current affairs and newspapers, the issue of centralisation of media ownership is a growing concern throughout our society, with "fewer and fewer corporations controlling more and more of our media" (Schudson, 2002: p.252). Kerry Packer's interest in Australian media is a major concern for those mainstream political economists who see the 'economy' as separate from other specialised domains, while from a critical political perspective, Packer's interest is seen as going beyond only a source of economic issues, and instead focuses on the interrelation between the economic, social and cultural issues surrounding a centralisation of ownership. "What marks critical political economy is that it always goes beyond situated action to show how particular micro contexts are shaped by general economic dynamics and the wider structures they sustain" (Golding and Murdock, 1991: p.18). When applying this to news and current affairs, in September last year, government funded broadcaster the ABC aired a story regarding Kerry Packer's Crown Casino, and the scrutiny surrounding the Casino's disregard for government gaming policy, after the Casino had been found to be "breaching numerous aspects" (ABC Stateline, 2003) of the Casino and Gaming Authority laws. ...read more.

Critical political economy helps to understand the implications of the media in a fuller sense and in doing so provides an approach to media that is holistic and encompassing. This paper compared the effectiveness of critical political economy compared to textual analysis and content analysis, and while the two alternatives were not critically evaluated, it is clear that they can be useful in providing answers where a critical political economy approach to media studies cannot. Critical political economy is not the 'only' adequate way of making sense of the media today, but essentially provides more answers than questions and serves as a basis for all other approaches. Reference List: ABC Stateline Victoria, (2003), ABC broadcast 5th September 2003. Cunningham, S and Turner, G. (2002), The Media and Communications in Australia, Allen & Unwin, Crows Nest, New South Wales. Golding, P and Murdock, G. (1991), "Culture, Communications, and Political Economy", Mass Media and Society, pp.15-32. Herald Sun Article, "Olympians to defy Athens bombers", 6th May 2004. McKee, A. (2001), "A Beginner's Guide to Textual Analysis", Metro Magazine, No.127/128, pp.138-149. Metamucil Advertisement (2002), Channel 10, 24th April. Schudson, M. (2002), "The News Media as Political Institutions", Annual Review of Political Science, No.5, pp.249-269. Turner, G. (1997), "Media Analysis: Competing Tradition", (in) The Media in Australia: Industries, Texts, Audiences, pp.297-314. - 1 - ...read more.