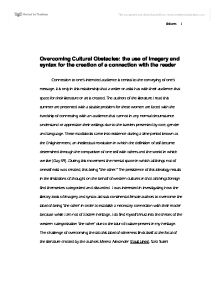 Overcoming Cultural Obstacles: the use of imagery and syntax for the creation of a connection with the reader

Overcoming Cultural Obstacles: the use of imagery and syntax for the creation of a connection with the reader Connection to one's intended audience is central to the conveying of one's message. It is only in this relationship that a writer or artist has with their audience that space for their literature or art is created. The authors of the literature I read this summer are presented with a sizable problem for these women are faced with the hardship of connecting with an audience that cannot in any normal circumstance understand or appreciate their writings due to the barriers presented by race, gender and language. These roadblocks came into existence during a time period known as the Enlightenment, an intellectual revolution in which the definition of self became determined through the comparison of one self with others and the world in which we live (Gay 59). During this movement the mental space in which all things not of oneself exist was created, this being "the other." The persistence of this ideology results in the limitations of thought on the behalf of western cultures in that all things foreign find themselves categorized and discarded. I was interested in investigating how the literary tools of imagery and syntax aid sub-continental female authors to overcome the label of being 'the other' in order to establish a necessary connection with their reader because while I am not of Eastern heritage, I do find myself thrust into the throes of the western categorization 'the other' due to the blur of culture present in my heritage. The challenge of overcoming the lab this label of otherness finds itself at the focal of the literature created by the authors Meena Alexander (Fault Lines), Sara Suleri (Meatless Days), Anita Desai (Fasting, Feasting), and Arundhati Roy (God of Small Things). In their differing mediums of fiction and non-fiction, these female sub-continental authors utilize the literary tools of imagery and syntax in efforts to overcome the social blockade of being classified and disregarded as 'the other'. ...read more.

The culmination of this defining takes form in Alexander's vivid description of birth and " the feel of [my newly born son's] lips, and my breast beneath (Alexander 167)." In turn, the physiological imagery utilized by Suleri bolsters not only her self-image and presence, but also the very tangible and realistic relation of these images in the physical world. In her writing temporal boundaries are transcended through the realistic nature of her images. The reader connects to the text in a sense that in order to appreciate these visions of another person's life and space, one must enter into the described situation for a moment and feel therein, not only the actual description, but also the emotions and views of the author at that precise moment. In the reading of this scene in Meatless Days, "to sleep on Ifat's bed was milk enough, to sleep in crumbling rest beside her body. Sometimes like water she runs through the sentences of sleep, a medium something other than itself, refracting, innocent of all the algae it can bear and capable of much transmogrification. Her water laps around me almost in reproach (Suleri 186)," the reader cannot only envision the bed Suleri discusses, but also, through her control of syntax by means of utilizing the present tense and first person narrative, the understanding of the images of 'algae, milk, water lapping and crumbling rest' evolves to a level of emotional understanding and connection with the view of the author. Through this the space the reader is effectively transcended and the labeling of 'the other' not only disappears, but is never even given a chance to exist. The use of imagery within writing takes on entirely new assets inside works of fiction, primarily in terms of its depth and the convenience of its access in the midst of this medium. The symbolic images of fiction are meant to be interpreted. ...read more.

This feeling, conveys the sensation of being "the other" and imposes an entirely new and novel sensation upon the reader, so, if only for a mere moment, a white person experiences the lack of connectedness and double consciousness that an immigrant or minority within American culture deals with their entire lives. On this level, the sense of understanding and connectedness that the reader feels with both the text and the author has come full circle, they are actually enabled to enter and feel the space of "the other" thereby negating the existence of 'the other' as they are now a direct part of it. While each of the authors utilize imagery and control of syntax to transcend the limited space of their readers, it is apparent that they each do so in varied ways. The added flexibility of fiction is that the greater availability of symbolism and linguistic manipulation also presents themselves openly. In conclusion, one theme remains the same - the brilliance and genius of these female sub-continental authors. My personal investigation into the power of the literary tools of imagery and syntax as methods for bridging the cultural barriers left in place from the Enlightenment has revealed a new level of appreciation and understanding for the works of those who, like myself, are classified as 'the other'. My sole regret marks itself as a feeling of depression that the genius of these women's writing style is necessary for them to establish the connection they seek. It cannot be wrong to question the ideals of the Enlightenment; ideas laid down hundreds of years ago that are clung onto by western cultures. Cultural, racial and gender issues are sure to plague mankind and the arts for centuries to come. Authors stemming from other cultures may always be forced to turn to alternative modes of connection and assertion of self. In order to transcend the sexist and racist ideals of the past, we, the individual members of our societies, must first discover the truth within ourselves in order to establish a stable base for our lofty goals of equalization. ...read more.