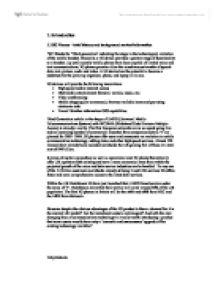 1. Introduction 1.1 3G Phones - brief history and background market information '3G' Stands for 'Third generation' indicating the stage in the technological evolution of the mobile handset. Basically, a 3G device provides a greater range of functionality to a handset. Up until recently mobile phones have been capable of limited voice and text communications. 3G phones promise allow the simultaneous transfer of speech data, text, picture, audio and video. A 3G device has the potential to become a substitute for the palm top organiser, phone, and laptop all in one. 3G devices will provide the following innovations: * High speed mobile internet access * Multimedia entertainment features- movies, music, etc. * Video conferencing * Mobile shopping (m-commerce). Browse available items and pay using electronic cash. * Travel/ Weather information GPS capabilities. Third Generation mobile in the shape of UMTS (Universal Mobile Telecommunications System) with WCDMA (Wideband Code Division Multiple Access) is already a reality. The first European networks are as we speak going live and an increasing number of commercial launches from companies such as '3' are planned for 2003- 2004, 3G phones offer users and consumers an evolution in mobile communication technology, adding video and other high speed services. Almost 120 licences have already been awarded worldwide the UK gaining five of these at a total cost of �40 billion. In terms of capital expenditure as well as operational cost 3G should theoretically offer UK operators both existing and new a more economical base from which the projected growth of the voice and data service industries can be handled. ...read more.

WCDMA has a potential 20-30% lower capital expenditure compared with GSM in its initial launch coverage phase. Mobile networks using WDCMA are therefore a cheap alternative to 2G as well as providing high capacity platform to enable voice and data revenues in the future. At present the level of input from firms working along side operators such as Hutchinson 3G is gathering pace. Due to the level of consumer multimedia access 3G devices enable company's direct marketing access to the consumer M-commerce as it has been labelled will eventually allow customer subscribing to a 3G service the opportunity to watch films and television direct from cinemas and broadcasters, it will also allow the public to buy and sell in the same way E-commerce has allowed internet subscribers to create virtual shops online. This new economic expansion is surely a positive opportunity for 3G operators to capitalise upon. Threats: Video Now Voice and picture now Coverage and demand are two of the biggest factors threatening the success of 3Gs UK feasibility. As shown by the diagram below compared to integrated 2 and 2.5G systems 3G main USP, video streaming technology, is only available in a very limited region of the country. This coupled with an ambiguous initial response in public demand may lead to rapidly falling sales and thanks to this low consumer coverage a no win situation. 3g operators will have to implement quick plans to expand current network capabilities if the wish compete with established 2G brands. ...read more.

Despite the solidity of the questionnaire itself a number of problems arouse with regard to myself when distributing the questionnaire. Firstly the human bias introduced by myself meant that the interviewees I managed to convince to take part in the research were overwhelmingly the same age as me and thus made the sample unrepresentative of the population in that the results would only reflect the 16-20 year old age bracket. This was unacceptable and so I reprinted an additional 25 questionnaires and posted them in the staff room at my school. The teacher population at Pates Grammar School is spread evenly between the ages groups detailed on my questionnaire as well being representative of a great number of different Teaching professions within one place. This I believe remedies the problem of weighted results and keeps the questionnaire as a viable research resource. 3.23 Also when out conducting the sample questionnaire I recorded several of the comments made by interviewees. This allowed a greater and more specific array of results in terms of what the public opinion is on 3G mobile phones out side of my own questionnaire thus allowing for more detailed reasons. These opinions can be found in the appendix. 3.3 Secondary Research My secondary research was conducted to establish a more national base of results and points for analysis within my research as the primary research I have already conducted was only conducted in a specific area and thus could be criticised for not being representative of the national population. Toby Roberts ...read more.