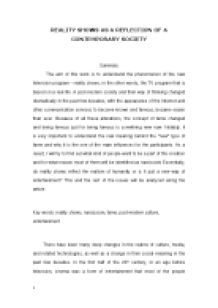 REALITY SHOWS AS A REFLECTION OF A CONTEMPORARY SOCIETY

﻿REALITY SHOWS AS A REFLECTION OF A CONTEMPORARY SOCIETY Summary The aim of this work is to understand the phenomenon of the new television program - reality shows, in the other words, the TV program that is based on a real life. A post-modern society and their way of thinking changed dramatically in the past few decades, with the appearance of the Internet and other communication services to become known and famous, became easier than ever. Because of all these alterations, the concept of fame changed and being famous just for being famous is something new now. Notably, it is very important to understand the real meaning behind the ?new? type of fame and why it is the one of the main influences for the participants. As a result, I will try to find out what kind of people want to be a part of this creation and for what reason most of them will be identified as narcissists Essentially, do reality shows reflect the realism of humanity or is it just a new way of entertainment? This and the rest of the issues will be analyzed along the article. Key words: reality shows, narcissism, fame, post-modern culture, entertainment There have been many deep changes in the realms of culture, media, and related technologies, as well as a change in their social meaning in the past few decades. In the first half of the 20th century, in an age before television, cinema was a form of entertainment that most of the people enjoyed as it was a distraction from a daily life. In the second half of the 20th century, when television appeared, cinema started competing, which made a film theatre become less interesting. The rise of television gave a possibility to the consumer to choose films and different types of shows, according to their taste and their own identity. The needs and desires of the consumers made the world think and the reality television have been invented. ...read more.

In other words, the key to understand the myth of Narcissus is not that he fell in love him himself, but that he failed to recognize himself in his own reflection. The world of a narcissist is a mirror; he/she spends the life trying to reach the ideal-self, the beautiful image that hides the true feelings of loneliness and internal emptiness. The modern narcissist seeks those reflections in television, Internet, magazines etc. Television and some of the reality shows give an image of idyllic participant, beautiful, charming, powerful and free to do whatever he/she wants.[5] Nowadays, narcissistic behaviour is so obvious that we see it everywhere in our culture. It is even alarming that we live in an age where narcissistic behaviour is so evident. Ironically, one of the best ways for a narcissist to show himself/herself at the moment is - reality TV and we (society) initially like narcissists more because of their exploitative behaviour. Reality shows are perfect for them, because of their arrogant behaviour, self-confident and showy personalities. In 2000 the reality programming shows exploded and many TV channels as well as mainstream networks created a shows like Big Brother, The Simple Life, Survivor and much more. There are many other different types of shows and mostly all of them share one characteristic: they exploit narcissistic behaviour for dramatic effect.[6] In a competition type of shows like The X Factor, American Idol, Hell?s Kitchen, The Apprentice, Top Model, etc. the participants do everything for supremacy and financial awards. It is debatable if their talent has much to do with their win, but it is certain that they get a reward for being ruthless, exploitative, authoritarian, and self-sufficient. It is almost impossible to imagine anyone without a heavy reserve of narcissism carrying on after a dressing-down from one of his or her acerbic judges.[7] Show like Top Model focus on body image, following the contestants as they struggle over and over with their weight and appearance. ...read more.

but all around the world. Well, now his name appears in Wikipedia, he appeared in almost all television channels and the album that John Lennon singed for him hours before he killed a former Beatle star now is up for sale at over 500.000 pounds. Mark Chapman is famous now, he acquired wanted fame, but kind of fame is that? Do by murdering someone you can call yourself famous? With that said, it looks like fame and the need of being famous is becoming too dangerous for our society and especially the young ones. However, the ones who participate in reality shows just to acquire that fame don?t care about the consequences, because they are so obsessed of the need to be known. It shouldn?t be forgotten that with fame comes also the ugliness and the dark side of being famous. In an interview with Los Angeles Times Woody Allen described fame: ?When you?re a kid you think to yourself, fame and fortune and it?s going to be so?but then you quickly find?wait a minute, the upside is nothing and the downside is nothing?[15]. In a conclusion, it is known that reality television achieved the results that any other television program could. With the development of the mass communication technologies, entertainment and the way that people want to be entertained changed. Reality shows are much more than just simple entertaining programs, but it is a proclamation of subjectivity, where the person is centred to himself in a wish to achieve wanted fame and visibility. These narcissistic participants reflect the contemporary television audience and their obsessive need to be famous. Fame has become the ideological and intellectual fabric of modern capitalism[16]. Along the evolution of society, the only consistent thing is our narcissistic fascination with ourselves, which is even more valued now. These entertaining shows and their base of reality turned to be significant and one of the key factors in modern mass communication system. ...read more.