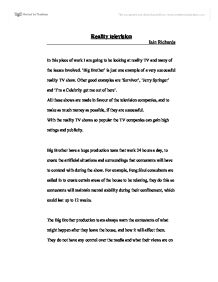 Reality television Iain Richards In this piece of work I am going to be looking at reality TV and many of the issues involved. 'Big Brother' is just one example of a very successful reality TV show. Other good examples are 'Survivor', 'Jerry Springer' and 'I'm a Celebrity get me out of here'. All these shows are made in favour of the television companies, and to make as much money as possible, if they are successful. With the reality TV shows so popular the TV companies can gain high ratings and publicity. Big Brother have a huge production team that work 24 hours a day, to create the artificial situations and surroundings that contestants will have to contend with during the show. For example, Feng Shui consultants are called in to create certain areas of the house to be relaxing, they do this so contestants will maintain mental stability during their confinement, which could last up to 12 weeks. ...read more.

Privacy is more or less prohibited by Big Brother because viewers like to know and see all, their ratings would suffer if viewers felt cheated. The contestants of these types of shows are normally seeking fame and money. Both these prizes are for gain but so are public hate and ridicule. I feel the question of whether or not we should allow this lies in the hands of the contestants due to the fact they are profusely warned of the set backs of participating in these particular shows. An example of this would be a previous contestant of Big Brother. 'Jade Goody' gained both ridicule and fame during her time in the famous house. Also she has profited greatly from the publicity bestowed upon her by appearing the reality TV show. Another drawback to the situation would include that when the contestants leave the house they have had a particular persona created for them by things such as the media and the way the shows are edited. ...read more.

The general public also like to see everyday people, interacting in everyday situations. Also viewers can have some control over who or what they want to see by voting people they dislike or are bored with. The viewers get to see new faces on television rather than faces they've seen before. My conclusion to my analysis of reality television in general is that it is another form of entertainment and should not be taken so seriously by the general public and media. People should realise that the contestants are placed in extra ordinary situations. Contestants choose to be put in these situations for fame, money, attention and to escape from their normal, routine lives. Reality TV shows take advantage of a society, which embraces fame as a good way of life, in order to make millions. Celebrities are respected by the public and these contestants, who are normal people, dream of making themselves a well known face. ...read more.