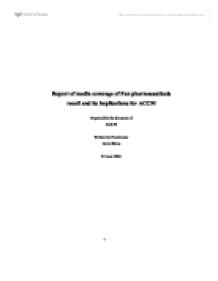 Report of media coverage of Pan pharmaceuticals recall and its implications for ACCM Prepared for the directors of ACCM Written by Practitioner David Stone 02 June 2006 -i- Executive Summary: The issue that has emerged and been tracked over the past five months has been the Pan Pharmaceuticals recall. The impact on ACCM has been analysed, conclusions reached and recommendations made. The modes of researching this issue have been the articles pertaining to the issue retrieved from mass media sources in order to determine the direct (or indirect) influence of the media on ACCM and its publics. Specifically, newspaper articles have been obtained from major general newspapers from Australian and international locations via the LexisNexis database. The publics identified being complimentary health users, those who used complimentary medicines before issue arose, sceptics of complimentary medicine, the therapeutic goods administration, major supplement manufacturers: Cenovis, Nature's Own, Natural Nutrition, Bio-Organics and Golden Glow. Pharmaceutical manufacturers that also produce supplements such as Sigma and Mayne, not withstanding the Therapeutic Goods Administration. The article files and summaries presented in the body of the report have enabled us to identify the messages that have been disseminated towards the publics in which ACCM has a vested interest in. The findings of which are that a substantial amount of newspaper articles seemed to give the impression that the Pan 'issue' was of the safeness and efficacy of complimentary medicines as opposed to the 'substandard manufacturing processes' that the TGA (Therapeutic Goods Administration) identified. Some however also empathised with complimentary health care organisations and some even reported on the illegality of the recall in New Zealand. In several instances the journalists opinions were pushed and many key words used were of an emotive nature. However, by and large the articles appeared to be of a factual nature. The ultimate goal identified is to raise awareness of the expediency of complimentary health preparations and eventually increase the use and popularity to various extents as outlined in the report. ...read more.

In the first sentence it identifies three publics; consumers, retailers and suppliers. It later lists suppliers such as Mayne, Cenovis, Nature's Own, Natural Nutrition, Bio-Organics and Golden Glow. Interpretation: This article is slightly negative towards the complimentary medicine industry as it implies that -14- Article File 6: "Pills work? Prove it", Andrew Bolt, Page 19, May 1, Herald Sun 2003 * Ingredients don't work * Public are influenced by anti-science, neo pagans * Various statistics about "ineffectiveness" * Complementary medicines "do not have to prove benefit" * Australians spend 4 times the amount on alternative remedies than pharmaceutical goods That more educated people were more likely to use alternative remedies Article Report 6: Direction Of Coverage for ACCM: This article has clearly been designed to give a very negative view of the complementary health services industry and as would be expected this impacts on ACCM. It constantly refers to alternative medicine or therapies in inverted commas, i.e. "medicines" identified on at least 16 separate occasions throughout the article. The author refers to it on other occasions as "muck". The journalist also implies through his rigorous use of more inverted commas that manufacturing problems were not the cause of the recall. The article refers to complementary medicines as "new age junk food". The manufacturers of which (e.g. ACCM's associates) being "peddlers of dodgy cures". He refers to narcissism as the root of this 'paganism' (i.e. complementary medicines). Factual Accuracy: The author also relates quotes obtained from studies at a variety of institutions ands submits it to the reader as 'scientific evidence' in a vain attempt to discredit the nature of complementary medicines and back up his own opinions. Of the quotes, one of them being, that according to the Annals of Internal Medicine that echinacea; "no proven efficacy...to treat any condition". Whereas according to the real report: A recent epidemiologic study (45) of a ginseng-growing region in Korea assessed the nutritional habits of 4634 inhabitants. ...read more.