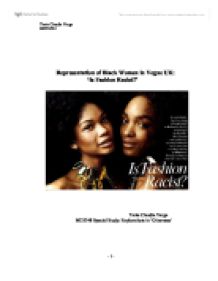 Representation of Black Women in Vogue UK: Is Fashion Racist?

Representation of Black Women in Vogue UK: 'Is Fashion Racist?' Tania Claudia Varga MD3248 Special Study: Explorations in 'Otherness' Abstract '"Racism and the Media" touches directly the problem of ideology, since the media's main sphere of operations is the production and transformation of ideologies. An intervention in the media's construction of race is an intervention in the ideological terrain of struggle' (Hall, 2003). This extended researched essay focalises on the representation of black women in the media, especially in issues of the Vogue UK Magazine. The hypothesis is that black women are underrepresented in the pages of Vogue UK and where they are represented their image still suffers from stereotypical constructions and politics of representation. I will aim to prove my hypothesis by looking at examples from various Vogue UK magazines and critically analyse them in relation to the images they portray and the representations they construct for contemporary black women. CONTENTS Abstract 2 Introduction 4 Vogue 5 Black Women as Metaphors for Africa 12 Erykah Badu's Representation in Tom Ford's Perfume Advert 14 The Assigned Place of Black Women in Fashion 15 'Blackface' 19 What kind of pretty are you? 21 Successful Black Women 23 The Age of the Cupcake - Lorraine Pascale 23 First Wives Club - Michelle Obama 24 Conclusions 25 Bibliography 26 Appendices 28 Appendix 1 - British Vogue Covers 28 Appendix 2 - Black Issue, Vogue Paris 31 Appendix 2a - Cover 31 Appendix 2b - Naomi Campbell 31 Appendix 2c - Toccara Jones 32 Introduction 'Then why, within a study of the spectacle of blackness and its often incisive exploits, devote a chapter to beauty? What is to be gained from entering this theoretical impasse and social minefield? Does appending the conundrum of race to beauty make the examination any easier or, instead, more arduous?' (Powell, 2008) Media holds a very important pose in creating representations of difference, identity, ethnicity, race, power relations. ...read more.

The June issue features Natalia Vodianova on the cover of the magazine and Jourdan Dunn on the cover of the supplement. Fig 16. Natalia Vodianova and Jourdan Dunn, June 2009 The image Jourdan transmits through these pictures is very youthful, beautiful and rejuvenating. The contrast between her and Natalia on the covers of the magazine and the supplement are obvious. Natalia is the 'celebration of shape and style', while Jourdan advertises 'clever looks at smart prices'. However, the distinction is that Vogue magazines are the representation of high fashion. In this sense, the supplement represents the lower end of fashion, the 'cool and cheap' clothes and accessories. Jourdan is hence portrayed as representing the readers looking for affordable and fashionable looks. 'Today, images of black people are often used in advertising [...] to represent something as 'cool', or part of the 'street' or 'urban' culture. Though some could argue that through this, black culture is being portrayed in a more positive light, this is still a very stereotypical and one-dimensional view of black people, and one that still carries many negative connotations and connections' (Longhurst et al, 2008). Jourdan is represented as a 'cool' teenager wearing summery clothes that make a great outfit for the beautiful summer nights. The title of the pictorial 'Summer Nights' also poses question marks; in the sense that, if the article was called 'Summer Days', would a black model still be presenting it? The connections between colours black and white and good and evil, light and dark have always been asserted. The connotations in this pictorial, although very subtle and almost absent are based on old presumptions and stereotypes of colour. Similarly, the advert for NEXT (Fig 7) also portrays a beautiful black model presenting a 'more dash than cash' clothes line. Through their attempts to become modern and comprehensive, these advertisers portray black women similarly: al the low end of fashion. ...read more.

When we see her, we see ourselves.' This image Michelle Obama portrays to black women is very strong and also met in the understanding of white women of her image. In the July 2009 issue of British Vogue, Michelle Obama is represented as a breath of fresh air, as a different image of power, fashion and femininity. She is slowly becoming a fashion icon as everyone is interested in what she wears and how she wears it. Her representations in the media always portray class, beauty and style. She is the change that black women need to look up to and feel strong. Vogue describes her as the 'physical aura of power', if power could be made physical. Her arrival at the gathering of 'first wives' 'changed the tenor', as she captivated everyone's attention. The editorial on Michelle Obama, however, can be analysed as a marketing ploy to achieve profit. Michelle Obama is the new trend everyone is talking about and Vogue UK took advantage from the opportunity to meet Michelle Obama at the First Wives Club gathering and featured her in the article. Conclusions The representations of black women found in several issues of UK Vogue have affirmed the initial hypothesis. Black models are highly underrepresented in the magazine's pages and especially on the magazine's cover. The issue from September 2009 had only one advert featuring a black model for DKNY. The rest of the magazine was white. Through the different representations, either through advertisements or through fashion pictorials, I have depicted a majority of images that construct the black woman as a background image in comparison to the white models, as a representation of otherness through the clothing she was assigned or as a beast waiting to be tamed. Representations of women in magazines are usually depictions of a relationship of subordination to men. However, apart from being represented as subordinated to men and an object for their satisfaction, black women also face prejudices of race that place them at the lower end of the advertisements and apparitions in fashion shoots for Vogue. ...read more.