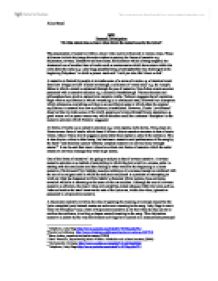 Research Investigation To what extent does a music video follow the narrative set by the lyrics? The presentation of narrative within a music video can be influenced in various ways.

MS3 Research Investigation 'To what extent does a music video follow the narrative set by the lyrics?' The presentation of narrative within a music video can be influenced in various ways. These influences include the image the artist wishes to project, the forms of narrative e.g. disjuncture, reverse, illustrative and non-linear, the audience which is being targeted, the intertexual use of another form of media such as controversies which have arisen within the news about the artist e.g. Lady Gaga possibly being a hermaphrodite was challenged at the beginning Telephone1 in which a prison ward said 'I told you she didn't have a dick'. A narrative is formed by people in to make sense of a series of events e.g. a historical event from how it began to how it ended or through a collection of 'moral tales' e.g. the Aesop's fables in which a moral is explained through the use of narrative. Non-fiction events are also presented with a narrative structure e.g. a scientific breakthrough. Various theorists and philosophers have tried to explain how narrative works. Todorov suggests that all narratives begin with an equilibrium in which everything is in a balanced state, followed by a disruption which unbalances everything and then to an equilibrium state in which either the original equilibrium is restored or a new equilibrium is established. However, Claude Levi-Strauss2 observed that we make sense of the world, people and events through binary opposites e.g. ...read more.

Each image is presented separately and placed within a non-chronological order. The setting of a 'grotty' underground club also adds to the effect of attempting to 'do it like a dude' as it is a common conception that men go to roughly places to emphasis their masculinity. Although the music video is graphic in the gestures Jessie J and the other dancers do, this video can be said to be one of few that have been able to follow the narrative which has been set by the lyrics. The effect of this song's lyrics as well as video on the audience can have various reactions, as some audience members may be offended by the material they are presented with whereas others, such as young females, may find the song liberating in some ways for another female to be able to present a song about gestures, which may be seen by some as inappropriate for females to do. The target audience for a music video also has an influence upon the chosen narrative. The creation of a music video could be based around a certain theme such as a superhero or a sexual theme. You Belong with Me9 by Taylor Swift is an example of a music video which has been targeted a teenage audience pacifically at females within this age group. This narrative has a linear structure and shows the process of the two main characters home lives up to their lives at school showing their different backgrounds at school which the audience would be able to relate back to. ...read more.

The results from my questionnaire showed that a narrative structure was a key essential; however a comedic element to a music video was also wanted by the audience as 'It tells the story in an amusing way and keeps you interested.' The results I gained I used to help construct a focus group of 17 people, who were involved within the questionnaire, to analyse three videos with different themes. For a narrative theme I chose Janie Got A Gun16 by Aerosmith, for a comedic theme Goodbye Mr A17 by the Hoosiers and for a sensual theme Leavin'18 by Jesse McCartney. I found that the majority preferred a comedic element of The Hoosier's in comparison to the sensuality of Jesse McCartney's music video as, for some of them, it made them uncomfortable viewing the music video however the majority liked the narrative of Aerosmith's Janie's Got A Gun but would have preferred if it was 'a bit more upbeat'.They keep you interestedThey keep you interested In relation to the lyrics, I have found that music videos tend to not completely follow the narrative set out by the lyrics however they do follow it loosely. A narrative can never fully be portrayed due to the structure being 'fragmented in music video cuts between performance and narrative'19An artist or director will find it hard to contain a complete narrative throughout the duration of a music video and may only amplify certain meanings and effects within the songs repeatedly to manipulate the audience emotionally or mentally. ...read more.