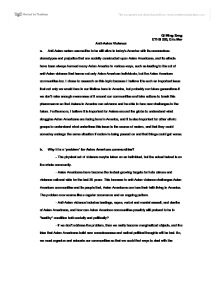 research paper Anti-Asian racism seems like to be still alive in today's America with its unconscious stereotypes and prejudice that are socially constructed upon Asian Americans, and its effects have been always harmed many Asian America in various ways,

Qi Ming Zeng ETHS 220, Eric Mar Anti-Asian Violence a. Anti-Asian racism seems like to be still alive in today's America with its unconscious stereotypes and prejudice that are socially constructed upon Asian Americans, and its effects have been always harmed many Asian America in various ways, such as leading to the act of anti-Asian violence that harms not only Asian American individuals, but the Asian American communities too. I chose to research on this topic because I believe it is such an important issue that not only we would face in our lifetime here in America, but probably our future generations if we don't raise enough awareness of it around our communities and take actions to break this phenomenon so that Asians in America can advance and be able to face new challenges in the future. Furthermore, I believe it is important for Asians around the globe to understand what struggles Asian Americans are facing here in America, and it is also important for other ethnic groups to understand what underlines this issue is the source of racism, and that they could someday undergo the same situation if racism is being passed on and that things could get worse. b. Why it is a 'problem' for Asian American communities? ...read more.

Second, the judge in the case sentenced each man to only two years probation and a $3,700 fine instead of pulling them in to jail. (Asian-Nation.org, 2007) Many Asian American community organizations held protests to fight for justice for Vincent Chin. The Coalition Against Anti-Asian Violence (CAAAV) was formed to "voice the Asian American community's concerns about anti-Asian violence and police brutality in the New York City area." As a result, the Vincent Chin case has become one of the most leading issue confronting Asians in America and awakened API communities to realize the importance of grassroots organizing within the community. Above are only a few historical and current examples of anti-Asian violence over the 200 years that Asian Americans have been facing, and there are many more were under-reported. c. Racialization of Asian Americans: Asian Americans are all believed to be exactly the same. Yet according to Darren R. Mooko, "Asian" encompasses at least 29 different ethnic groups, and that they encompass different ethnicity, religion, language, culture, class, color, and race. Xenophobia and Population Visibility: Asian Americans are the one of the fastest-growing populations in the United States, and this visibility of ethnic diversity often seems to threaten many individuals. "Unfair" economic competition belief: Asian Americans are often perceived as "aliens" or "foreigners" and that they're taking jobs away from "real" Americans. ...read more.

Founded in 1991, National Asian Pacific American Legal Consortium (NAPALC) is a nonprofit, nonpartisan organization that works to advance the legal and civil rights of Asian Pacific Americans through litigation, public education and public policy. In response to the issue, NAPALC addresses and prevents discrimination against Asian Pacific Americans including anti-Asian violence, racial profiling and other forms of discrimination. Founded in 1973, Organization of Chinese Americans (OCA) is non-profit, non-partisan that is dedicated to advancing the social, political and economic well-being of Asian Pacific Americans in the United States. In response to the issue, OCA commemorated 25th Anniversary of Vincent Chin's Death and renewed its commitment to hate crimes prevention and education on June 19th, 2007. e. I have learned from my research that anti-Asian violence has been a serious problem for both Asian American individuals and their communities for at least the last few decades. However, although anti-Asian violence is a serious problem for Asian American communities, it forced individuals to stick together at times for physical or political protection, and this has shaped the Asian American communities in a positive way. Overall, this research reinforced me the idea that learning about how the history operated in the past would allow us to make a difference for our people and communities in the future. f. ...read more.