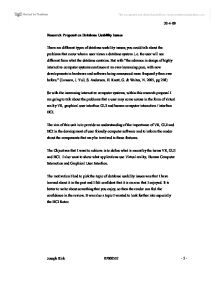 Research Proposal on Database Usability Issues There are different types of database usability issues; you could talk about the problems that occur when a user views a database system .i.e. the user will see different from what the database contains. But with "the advance in design of highly interactive computer systems continues at an ever-increasing pace, with new developments in hardware and software being announced more frequently than ever before." (Lawson, J. Yull, S. Anderson, H. Knott, G. & Waites, N. 2005, pg 258) So with the increasing interactive computer systems, within this research proposal I am going to talk about the problems that a user may come across in the form of virtual reality VR, graphical user interface GUI and human computer interaction / interface HCI. The aim of this unit is to provide an understanding of the importance of VR, GUI and HCI in the development of user friendly computer software and to inform the reader about the components that may be involved in these features. The Objectives that I want to achieve is to define what is meant by the terms VR, GUI and HCI. I also want to show what applications use Virtual reality, Human Computer Interaction and Graphical User Interface. The motivation I had to pick the topic of database usability issues was that I have learned about it in the past and I felt confident that it is an area that I enjoyed. ...read more.

HCI or Human Computer Interaction is a process that evaluates the interaction between the user and a program. For example does the user take advantage of features a program may have, do they use headphones when using a program. Everything that is used to create a VR (virtual reality) or create GUI (graphical user interface) is put into play at HCI. According to (Dix, A. Finlay, J. Abowd, G. & Beale, R. 2004) Human computer interaction "is the study of how people interact with computers and to what extent computers are or are not developed for successful interaction with human beings." So HCI takes into account both sides of the computers users. It looks at things like the computer graphics, operating system, and programming language and on the human side according to (Cairns, P. & Cox, A. 2008) "communication theory, graphic and industrial design disciplines, linguistics, social science, cognitive psychology, and human performance are relevant." So for a program to incorporate good HCI, it could contain features such as movable interfaces with pull-down menus, dialog books, check boxes, scroll bars etc. By incorporating features like these to a program the user will feel they have more of a input on what they are doing, this mainly created by the fact that the user will get the feeling that they are controlling what they do. But according to (Preece, J. ...read more.

To obtain answers from my research I would plan question six before school ends for summer, I would ask the kids what they plan to do for the summer, and when they return in September I would ask the same kids what they actually did with the summer. I would use the same concept for question four, I would ask for permission to maybe take note of different kids weight and height before they left for summer, and after they return from there break I would weigh and measure the same kids to work out if the summer has been an active one. Everything else I feel has no major rush but maybe for question three I would take note of the highest quality Virtual Reality system there is available now and in six months I would check if it has been improved any. REFERNCES Cairns, P. Cox, A. (2008) Research Methods for Human-Computer Interaction Dix, A. Finlay, J. Abowd, G. Beale, R. (2004) Human-Computer Interaction Galitz, W. (2007) The essential guide to user interface design Lawson, J. Yull, S. Anderson, H. Knott, G. & Waites, N. (2005) BTEC National Study Guide: IT Practitioners Preece, J. Rogers, Y. Sharp, H. Benvon, D. Holland, S. Carey, T. (1994) Human Computer Interaction Tech Target (2008) Virtual Reality [on-line]: http://searchcio-midmarket.techtarget.com/sDefinition/0,,sid183_gci213303,00.html# [Accessed: 22/04/09] Tech Target (2006) GUI [on-line]. (http://searchwindevelopment.techtarget.com/sDefinition/0,,sid8_gci213989,00.html). [Accessed: 26/04/09] Think Quest: Virtual Reality [on-line]. http://library.thinkquest.org/26890/virtualrealityt.htm [Accessed: 22/04/09] WORD COUNT ?? ?? ?? ?? 20-4-09 Joseph Kirk 07000552 - 1 - ...read more.