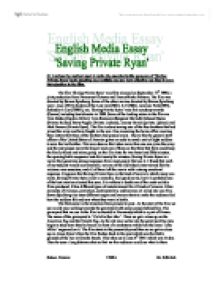 Q: Analyse the method used to make the opening battle sequence of 'Saving Private Ryan' both shocking and realistic and say how effective you find it as an introduction to the film. The film 'Saving Private Ryan' was first released on September 11th 1998, a joint production from Paramount Pictures and DreamWorks Pictures. The film was directed by Steven Spielberg. Some of the other movies directed by Steven Spielberg were: Jaws (1975),Raiders of the Lost Arc(1981), E.T(1982), Jurrrasic Park(1993), Schindler's List (19993), etc. 'Saving Private Ryan' won five academy awards (Oscars) including best director in 1999. Some of the leading actors in the film are Tom Hanks (Captain Miller), Tom Sizemore (Sergeant Horvath) Edward Burns (Private Reiben) Barry Pepper (Private Jackson), Jeremy Davies (private Upham) and Matt Damon (Private Ryan). The film is about saving one of the four brothers that had joined the army and have fought in the war. One mourning the home office receives three letters that three of the brothers had passed away. Due to this the general staff officer of the United States of America gives an order to send a unit of eight soldiers to save the last brother. This was done so that when more than one son joins the army and the rest passes away the brig at least one of them so that they that they could keep the family blood and name going on the film lasts for two hours and fifty minutes . the opening battle sequence lasts for twenty for minutes. ...read more.

Then he orders them to jump from the corner of the boat. Then as the soldiers attempt to swim ashore most of them drown or get shot. The Steven Spielberg use the water to create the sound effect. As the soldiers go under water the sound is muted and as they rise their heads above the water the sound of gun shots reappear. The various amounts of perspectives give this scene an overview of carnage. Camera works are so good that they brings the audience closer to action to see from the Germans perspective and make the audience think that the U.S. mission was hopeless. The third scene is about Captain Miller's confusion. In this scene we see that Miller dragging a soldier onto the beach. At this point the dramatic influence kicks in. as he saves the soldiers from downing and brings him onto the beach the soldier gets shot. As he takes cover behind the hedgehog you could see the confusion in his face. He doesn't seem to hear what the soldiers are requesting for. As well as his hands keep shaking through out the film. This shot is in slow-motion to increase the realism. Captain Miller's perspective shows the death of the soldiers on the beach head. The sound hear is muted but the explosions could still be heard vaguely. Then we get a close up on Captain Miller's helmet and as he puts it on the blood that was collected from the water starts dripping on his head. ...read more.

Steven Spielberg has chosen a different angle in the making of this movie than is normally taken. He chose not to portray the crimes against the Jews, but rather to applaud the brave efforts of the soldiers that essentially won the war and destroyed the Nazi government. He reminds every American that many men have died protecting the rights that they often take for granted every day. Saving Private Ryan is a movie that should make every American realize that Memorial Day is more than a day off. Steven Spielberg used the newsreel camera technique to make the scene come to life and so that the audience could really feel that they are a part of what is going on. The special effects in the scenes made everything seem real, this could be seen when the bobs go off and the soldiers lose their limbs you could see them flying around in air. A range of computer graphics were used to make the atmosphere look effective on screen and the computer graphics were used to show the soldier with their arm or half the body missing. I think that Steven Spielberg succeeded in putting "chaos up on screen" because he used the elements of film making which were never see before seen on screen. He used sound and camera work to make the film look as realistic as possible. I thought that the film was directed really well as a whole but the opening battle sequence had an enormous effect on the audience as it prepared them for what was coming next. ?? ?? ?? ?? Sakura Pietersz 11SSA Mr. S.Stritch ...read more.