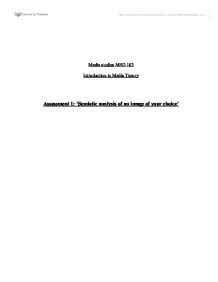 'Semiotic analysis of an image of your choice'

Media studies MED 103 Introduction to Media Theory Assessment 1: 'Semiotic analysis of an image of your choice' Introduction: The aim of the essay is to undertake a semiotic analysis of an image, in this case a magazine advertisement, and to comment on the strengths and weaknesses of this approach. Using analysis of: * Denotation vs. Connation, * Signifier vs. Signified, * Codes, * Signs, * Representation of reality. The image will be dissected into its individual building blocks in order to assess its effectiveness as an advert and its commentary on society today, also discussing whether semiotic analysis is the truest discipline to follow in this case. Denotation vs. Connation, Signifier vs. Signified: The image I have chosen is a magazine advertisement for 'Heinz Big Soup'. In order to analysis the semiotics of this image I will firstly discuss what is visibly present in the image (known as the signifier) and what the suggested meanings are (what is signified). The main focus of the image is a large, seemingly well made cooking pot with a violently broken handle, in the lower right hand corner there is a picture of a can of 'Heinz Big soup'. The pot is positioned on a warm beige background and there is no text. What is denoted in the image is a pot with a broken handle and a can of soup, however there are underlying conations as to what the suggested meaning of this image is. ...read more.

Textual codes play a role in the way in which an advert is interoperated. In this advert the camera work gives the text a feeling of warmth and comfort, conjuring up images of eating the soup by a fire side on a cold winters evening. If the colours were to change for instance, this may give the text a different meaning. The main focus of the text is the broken pot with one half of the handle in the foreground, the wood violently snapped and the metal bracket inside the handle twisted and broken. Because of its placement in the text it is clear to see in detail the violence of the handle breaking, signifying the quality of the soup (see above). If this handle were to appear in the background what is signified would be ambiguous. The viewer must decode all these elements in order to understand what is signified by the advert. Signs: The sign is the relationship between: * "A 'signifier'- the form which the sign takes; and * The 'signified'- the concept it represents". (Saussure: 1983) The sign is the result of these two elements accessed together. There are signs that have to be interpreted within this advert for it to be understood in the context it is meant. In order for the viewer to understand this image they would first have to be aware of the following facts: * Understanding what soup is. ...read more.

It is a way of making common sense of our own reality and a way of recording the way things have changed in society: (Schroeder: 1998) "...there is nothing natural about our values; they are social constructs that not only vary enormously in the course of time but differ radically from culture to culture". Conclusion: This advertisement signifies big, chunky soup that in reality would not break the handle of a cooking pot; this is just reinforced in the advert as it is assumed that in this case it has. Consumers are aware that the sign is exaggerated in this case; however the mental concept remains clear. Other adverts for this product have revolved around a similar principle, one in particular denoted the back of a lorry, empty apart from a can of 'Big Soup' signifying the same element s again and using the same codes, a whole lorry is not needed to transport one can of soup. This advert seems to be aimed at both men and women, it was collected from a men's 'motoring' magazine, however sociological ideals dictate that women would undoubtedly be interested also. The advert is affective, humorous which make it memorable, conveys its message without become complicated or even offering a gender identity. The only comment it makes regarding society is that soup has little or no gender identity and consumers are hungry so they need 'Heinz Big Soup' providing they have a cooking pot that is up to the job of preparing it. ...read more.