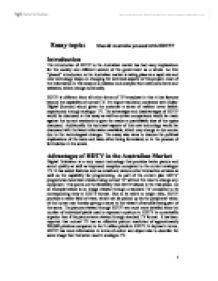 Should Australia proceed with HDTV?

Essay topic: Should Australia proceed with HDTV? Introduction The introduction of HDTV to the Australian market has had many implications for the society and different sectors of the government as a whole. As this "phased" introduction to the Australian market is taking place at a rapid rate and new technology keeps on changing the technical aspects of this project, most of the information in this essay is a collation and analysis from web documents and websites, which change continually. HDTV is different from all other forms of TV broadcast in that it has features beyond the capability of normal TV. It's higher resolution combined with Dolby Digital Surround sound gives the customer a sense of realism never before experienced through analogue TV. The advantages and disadvantages of HDTV would be discussed in this essay as well as certain comparisons would be made against the current standards to give the reader a quantifiable idea of the topics discussed. Additionally the technical aspects of this new technology would be discussed with the latest information available, which may change in due course due to the technological changes. The essay also aims to discuss the political implications of the issue and laws either being formulated or in the process of formulation in the senate. Advantages of HDTV in the Australian Market Digital Television is a very recent technology that provides better picture and sound quality as well as improved reception compared to the current analogue TV. It has added features such as email and various other interactive services as well as the capability for programming. ...read more.

This is purely to alleviate the burden on the broadcasters but this does in fact lower the quality of the experience for the consumers. There is the other concern about services to the "Outback Australia" of HDTV services. Currently the government is still struggling to provide basic communication services to the outback and their needs to be a certain amount of caution that this technology in all it's glory does not become an expensive exercise for our outback dwellers to access. Technology with it brings with it all the burdens as it does all its fruits. The support structure for such technology could depend on a number of issues, which could create a Domino effect. For example, when the HDTV is implemented, all the faults associated with the system would require an entirely different level of technical knowledge to fix. For this all technicians who are currently supporting the provision of normal TV would either need to be re-trained or will be made redundant. In the event that they are retrain able, it will cost the company time and money and since the technology is very new a scheduled training update would need to be carried out as new information about faults come into consideration or when extra features are being added. Alternatively, if the employees cannot cope with the new technology they would need to be made redundant and this could add on to various social implications on the society in general, leading to job losses. Additionally, there have been studies done to prove that initially the cost of changing over from the analogue technology to the HDTV technology would be high. ...read more.

Both the Government and the free-to-air broadcasters are now indicating that HDTV may not be the primary driver of digital TV take-up as they had originally believed. This puts Australian consumers in the position of having no certainty that HDTV will continue beyond 2004, while being encouraged by the Government's pro-HDTV policy, and the free-to-air networks' impending broadcast and promotion of HDTV, to invest in new HDTV receiving equipment. This situation will create consumer uncertainty about the future of HDTV and undermine consumer confidence in digital TV as a whole". Foxtel Submission: Australia, http://www.foxtel.com.au/submissions.jsp, Accessed January 2003 and February 2003. On the other hand, as can be deducted by the review from FOXTEL, since they have not been presented with an opportunity to make a profit and introduce HDTV simultaneously, the company has sounded it's intension to slow down the face of HDTV roll out or at least it will try. It's inherent that any change of heart by major networks such as FOXTEL, who have had to comply with increased services their by merging with OPTUS vision, would have an associated cost passed on to the customers or to other areas. This is the dilemma between political sense and economic sense. Conclusion Conclusively, the introduction of HDTV is a reality and at the time of writing it is planned to commence its first trial multi channelling for ABC and SBS stations. Considering all the pros and cons of this issue it is evident that like any technology it will take some time and cost to get adjusted to but with the future demanding intense information consumption it will prove to be a necessary part of the future lifestyle. ...read more.