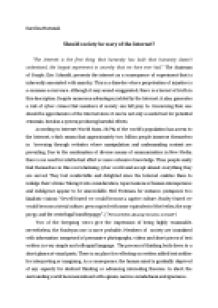 Should society be wary of the Internet?

﻿Karolina Matusiak Should society be wary of the Internet? ?The Internet is the first thing that humanity has built that humanity doesn?t understand, the largest experiment in anarchy that we have ever had.? The chairman of Google, Eric Schmidt, presents the internet as a consequence of experiment that is inherently associated with anarchy. This is a disorder where perpetration of injustice is a common occurrence. Although it may sound exaggerated, there is a kernel of truth in this description. Despite numerous advantages yielded by the Internet, it, alas, generates a risk of cyber crimes that members of society can fall pray to. Concerning that, one should be apprehensive of the Internet since it can be not only a useful tool for potential criminals, but also a system producing harmful effects. ...read more.

Members of society are inundated with information comprised of persuasive photographs, videos and short pieces of text written in very simple and colloquial language. The process of thinking boils down to a short glance at visual parts. There is no place for reflecting on written added text neither for interpreting or imagining. As a consequence, the human mind is gradually deprived of any capacity for abstract thinking or advancing interesting theories. In short, the surrounding world becomes imbued with egoism, narrow-mindedness and ignorance. To realize another jeopardy resulting from the usage of the internet, one has to analyse the value that is strongly propagated by society of the USA, where the Internet finds its roots. The American constitution attaches the greatest importance to freedom of speech which is also an integral feature of the Internet. ...read more.

Aiming at escape from the problems of real life, they seek consolation and acceptance in a virtual world. It satisfies them and they gradually lose the ability to differentiate between the cyber and the real world. They become engrossed to the extent that it is almost impossible to imagine the future without the Internet. In other words, people become slaves of something that nowadays gives them the greatest pleasure. On balance, the phenomenon of the Internet entails a number of threats that people are usually oblivious to. It appears that it blocks analytical thinking, encourages to express one’s opinion even when disparaging, as well as is highly addictive. Simultaneously, members of societies become escapists, egoistic and naïve, devoid of creativity, enmeshed in ostensible and artificial relations. Notwithstanding the fact that Huxley presumably foreshadowed the dangers, they are not inexorable. In order to avoid potential results people should become more aware of their own deeds and stop putting own pleasures in the highest place of the hierarchy. ...read more.