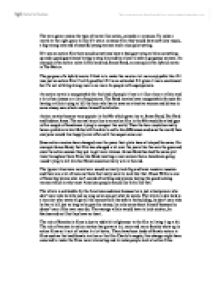 Since action movies have changed over the years their plots have all stayed the same. For example James Bond, that film has changed a lot over the years like the cars the guns and even the action scenes they put in get more intense.

The term genre means the type of movie like action, comedy or romance. To make a movie to the right genre is like if it was a romance film they would have soft slow music, a big strong man and a beautiful young women and a nice quiet setting.

If it was an action film they would sometimes have a bad guy trying to blow something up and a good guy always trying to stop him and be a hero to save a gorgeous woman. An example of an action move is Die hard and James Bond, an example of an hybrid movie is The Matrix.

The purpose of a hybrid movie I think is to make the movie a lot more enjoyable like if it was just an action film it’s still good but if it is an action/sci fi it gives it more excitement but it’s not with big strong men in no more its people with superpowers.

An action movie is recognizable for the kind of people it has in it like a hero a villain and a lot of car chases or a lot of explosions. The Bond movies have recognizable formula for having a villain trying to kill the hero who has to save an attractive woman and drives in some classy cars which makes himself look better.

Action movies became very popular in the 80s which gave rise to James Bond, Die Hard and Indiana Jones. The normal story line to an action film in the 80s would be a bad guy with a couple of henchmen trying to conquer the world. Then the hero would normally have a problem in his life but still be able to settle his differences and save the world then everyone would live happily ever after until the sequel came out.

Since action movies have changed over the years their plots have all stayed the same. For example James Bond, that film has changed a lot over the years like the cars the guns and even the action scenes they put in get more intense. James Bond has had the same plot lines throughout there films like Bond meeting a nice women then a henchmen going round trying to kill him but Bond would normally win in the end.

The typical American movie hero would normally look big and have massive muscles and there are a lot of men out there that really want to look like that. Bruce Willis is one of those big heroes who isn’t scared of nothing and always having the good looking women which is why most American people would like to be like that.

The villain is unlikeable by the American audience because he is just a bad person who don’t care who he kills just as long as he can get what he wants. The villain in die hard is a terrorist who wants to get all the money from the safe in the building, he don’t care who he has to kill just as long as he gets his money, he only cares about himself because he doesn’t care if his own men die. The average villain would have to look sinister, be fearless and act like they have no heart.

The role of females in films is just to add a bit of glamour to the film to living it up a bit. The role of women in action movies has grown a lot, more and more females show up in action films so it sort of makes it a lot better. There have been loads of female actors in films such as the lead female in alien or the film Charlie’s angels, this change might have occurred to make the films more interesting and to make people look at action films differently. But all the fast paced scenes in the action films have all stayed the same.

Special effects have changed how action films look like they have made people have super strength or even fly which normal action heroes can’t do. But a super hero film is similar to an action film by having the same fast paced action scenes and they are both very enjoyable.

The lighting in an action film is used to create the atmosphere like if the main character was in a dark silent room the audience would like to know who is in the room with him or what is in the room with him. The music in an action movie creates tension so if the music suddenly began to grow louder and go faster you immediately know something big is going to happen. Sound effects just make the movie sound good and look better. For example Die Hard has fast music when Bruce Willis is either in a gun fight or someone is going to blow something up.

What I have found out about action movies is they can be more complicated then you think. A lot of things go into action films like how it is laid out what kind of storyline it has and if the film will be a success or not with the right type of audience you was aiming for. All together action movies are exciting fun to watch and give you a lot of action.