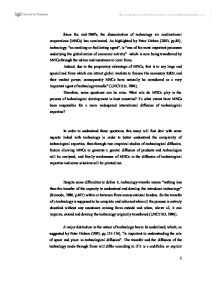 Since the mid-1960's, the dissemination of technology via multinational corporations (MNCs) has accelerated.

Since the mid-1960's, the dissemination of technology via multinational corporations (MNCs) has accelerated. As highlighted by Peter Dicken (2003, pp.85), technology, "an enabling or facilitating agent", is "one of the most important processes underlying the globalization of economic activity" which is now being transferred by MNCs through the advice and assistance to local firms. Indeed, due to the proprietary advantage of MNCs, that is to say large and specialized firms which can attract global markets to finance the necessary R&D, and their market power, consequently MNCs have naturally be considered as a very important agent of technology transfer" (UNCTAD, 1996). Therefore, some questions can be raise. What role do MNCs play in the process of technological development in host countries? To what extent have MNCs been responsible for a more widespread international diffusion of technological expertise? In order to understand those questions, this essay will first deal with some aspects linked with technology in order to better understand the complexity of technological expertise, then through two empirical studies of technological diffusion, factors allowing MNCs to generate a greater diffusion of products and technologies will be analysed, and finally weaknesses of MNCs in the diffusion of technological expertise and some solutions will be pointed out. Despite some difficulties to define it, technology transfer means "nothing less than the transfer of the capacity to understand and develop the introducer technology" (Komoda, 1986, p.407) within or between firms across national borders. ...read more.

Regarding the average responses of Pearce's questionnaire on conditions and circumstances considered to have most influenced recent multinational in order to extend their R&D activities, three main drivers of the international process are underlined : country-specific factors, such as "the desire to exploit the pool of research talents to tap into another scientific culture", provision of support services in order to help standardize products or new products, and strategic factors giving advantages on competitors. But usually speaking, "it should be recalled that there are powerful locational reasons for both the centralization and decentralization of R&D" (John Dunning, 1993, pp.309). The main assumption extracted from the analysis of both John Cantwell and Robert Pearce is that MNCs provide a positive impetus in the process of technological development in the whole world. "To the extend that technological development consists of mastering the "know-how" (operational procedures) of a given technology", it is assumed that MNCs, both by transmitting state-of-the-art knowledge and providing the means to make it operational, have a positive effect. (John Dunning, 1991). Moreover, by the means of some strategies, such as making "the adaptations needed to make the technology function efficiently" or by updating "affiliate's technology as local circumstances dictate" (UNCTAD, 2001, pp.56), MNCs also seems to participate in the improvement of host developing countries who can enjoy greater technological development and benefit from the networks of MNCs, thus stimulating "local competitors to perform more efficiently". ...read more.

Dunning, 1993, pp.321). This has been also highlighted by Carlos Correa (1981) who mentioned that those government policies have other several issues. They can permit to reduce costs or to minimize the consequences of restrictive practices and the competition occurring with advancing industrial MNCs, but also to assure the appropriateness of transferred technologies. Nevertheless, John H. Dunning (1993, pp.320-321) made the point on the fact that the limitation of "the amount of inward investment", "certain sectors to domestic ownership" or also "technology payments to foreign firms" are some of those policies which can alter the good diffusion of technological competences between MNCs and host countries. In conclusion, multinational companies play a key role in determining the international diffusion of technology and, are now looking for more efficient methods in order to efficiently widespread the diffusion of technology and have greater interactive relations with affiliates or external firms. Their greatest challenge resides in creating a business environment that allows them to exchange information quickly, securely and efficiently from anywhere in the world, this by the means of production-related technologies and research and development capabilities, with the formers quite more easy to diffuse than the latters. However, multinational companies acquire new technologies from their own research and development activities or through the work of these educational and research institutions, facilitating the transfer of technology through spin-offs. Nevertheless, some weaknesses are present in the diffusion of the technology, (inappropriate technology, foreign competitors, etc.), but by the means of policies governments, which are another way to permit a widespread international diffusion of technological expertise, they can be water down. (2520 words) 1 ...read more.