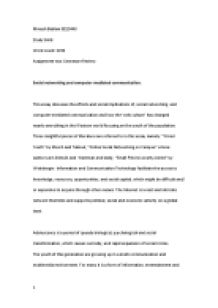 ï»¿Minash Bablani B215448 Study Skills Word count: 2034 Assignment two: Literature Review Social networking and computer-mediated communication. This essay discusses the effects and social implications of, social networking and computer-mediated communication and how the ‘web culture’ has changed nearly everything in the Western world focusing on the youth of the population. Three insightful pieces of literature are referred to in this essay namely: “Wired Youth” by Mesch and Talmud, “Online Social Networking on Campus” whose authors are Alemán and Wartman and lastly, “Small Pieces Loosely Joined” by Weinberger. Information and Communication Technology facilitate the access to knowledge, resources, opportunities, and social capital, which might be difficult and/or expensive to acquire through other means. The Internet is a vast and intricate network that links and supports political, social and economic activity on a global level. Adolescence is a period of speedy biological, psychological and social transformation, which causes curiosity, and rapid expansion of social circles. The youth of this generation are growing up in a multi communication and multimedia environment. For many it is a form of information, entertainment and communication, either way it serves as a purpose for all. There is concern expressed that the Internet access in a household negatively affect patterns of interaction between parents and children, increasing intergenerational conflicts and weakening family cohesion (Watt and White 1994; Lenhart et al., 2001, Talmud and Mesch 2010) Recently, small business have grown rapidly due to the increasing use of the Internet. ...read more.

The pull of Facebook is so strong, that many students refer to it as an addiction. It has an addictive quality because of the pleasure it provides for its users creating a sense of dependency. (Alemán & Warman, 2009) The book is divided into various chapters that introduce campus culture online, follow onto its emergence and acceleration into student lives. The first two chapters review the importance of online culture especially Facebook. Certain schools and universities have even higher percentages than 85%, which is shown through a study done in the University of Michigan, which shows that 99.5% of students have Facebook accounts. It is their primary form of communication; it even overtakes text messages, emails and instant messaging. Facebook allows one to form a social identity as opposed to these other forms of communication, which is what makes it stand out compared to emails and text messages. The third chapter is perhaps the most essential part of the book. It interviews four university students, out of which one is white and three are of different ethnic minorities and two out of the four are homosexual. They give detailed accounts on campus culture, identity and Facebook, which describe in detail their experiences and the effects of social networking in identity construction, which are formed on the basis of race or ethnicity, gender and sexuality and socioeconomic class. It presents diverse voices of university students to elucidate the multiple meanings of computer-mediated social networking on campuses. ...read more.

It has now become a lifestyle for everyone from young to old and they are dependent on it. This literature review, assess this through different books and different author?s perspectives and comes to the conclusion that the Web is a good thing when used in balance for the right purposes. Identity formation should not entirely be left up to Facebook or other social networking sites as they often create wrong impressions. Weinberger?s text successfully notices and explains how the Internet is not just virtual but it connects and affects society and the other two texts have a similar purpose but with regard to teenagers. All the texts are fairly recently published except ?Small Pieces Loosely Joined? which does not consist of any research but just Weinberger?s perspective of the Internet and the research conducted in Wired Youth (in Israel between 2001 and 2004). Hence, the research presented in the texts and used in this essay still bares relevance as it is from 2009, however recent studies would be able to give a clearer idea of the current user percentage. Therefore, in conclusion Internet adoption and integration into routine communication with others has had an affect on the youth?s access to positive and supportive ties, but also on the extent of his/her exposure to negative encounters and persistent harassment. However, ICT is a distinct sphere of rules and norms of behaviour that cannot be wholly reduced to communication and although ICT is socially embedded, it cannot be reduced to social structure. ...read more.