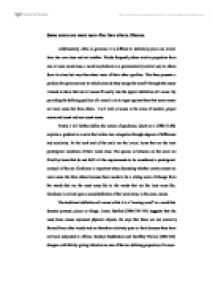 Some nouns are more noun-like than others. Discuss.

Some nouns are more noun-like than others. Discuss. Unfortunately, often in grammar it is difficult to definitely place one lexical item into one class and not another. Words frequently share similar properties from one or more word class; a word may behave in a grammatically similar way to others from its class but may then share none of their other qualities. This then presents a problem for grammarians: to which class do they assign the word? Through this essay I intend to show that not all nouns fit neatly into the typical definition of a noun. By providing the defining qualities of a noun I aim to argue against them that some nouns are more noun-like than others. I will look at nouns in the areas of number, proper nouns and count and non count nouns. Firstly, I will further define the notion of gradience. Quirk et al (1985:73,90) explains a gradient as a scale that relates two categories through degrees of difference and similarity. At the each end of the scale are the lexical items that are the most prototypical members of their word class. The spaces in between on the scale are filled by items that do not fulfil all the requirements to be considered a prototypical example of the set. ...read more.

The names of reverends will always be marked with the definite article both in the written and spoken form such as in the Reverend John Smith. The rule also changes for titles of peerage when followed by an "of" phrase such as in the Prince of Wales. There is further variation of proper nouns in temporal names. Quirk et al (1985:292) say that the strong type of temporal name has no article when it is used to refer to dates in the calendar as recurrent items, these can include months or days of the week and religious festivals or periods. However when these words refer to individual periods of time or when they refer, as a group, to more than one occasion, they change to the weak form of the noun and take the article. Quirk et al (1985:292) states that when in the weak form they often behave more like common nouns. For example when referring to a recurring event such as "The bin men come on a Tuesday" the proper noun is then able to occur in front of the indefinite article. Moreover days of the week are able to take a plural as in " I love Fridays". ...read more.

Quirk et al (1985:306) show that noun mutates, there is a change of the vowel, on seven occasions, these include; tooth to teeth and mouse to mice. Furthermore the occurrence of the -en plural end in words such as child children or ox oxen supplement the notion that the irregular plural is by far the most unpredictable noun variety. For this reason irregular plural nouns will be considered to be furthest away from the most prototypical nouns, mass nouns. It can be seen that the some nouns are more noun-like than others but which nouns are the most noun-like is dependant on your definition of a noun. In my opinion Mass nouns are by far the most predictable and agreeable nouns so they were taken to be the most prototypical. Further away from them on the gradient would be count and non-count nouns also regular plurals, further still would be proper names and furthest away would be irregular plurals. This essay has looked at the occurrence of count, non-count and mass nouns. Also it has considered at the degree of variation in forms of nouns such as proper nouns and plural nouns. This essay has shown that not all nouns fit precisely into the typical definition of a noun. By providing the defining qualities of a noun this essay has argued that some nouns are more noun-like than others. ...read more.