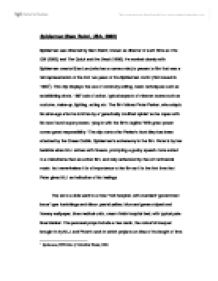 Spiderman (Sam Raimi, USA, 2002) Spiderman was directed by Sam Raimi, known as director of such films as The Gift (2000) and The Quick and the Dead (1995). He worked closely with Spiderman creator Stan Lee (who has a cameo role) to present a film that was a fair representation of the first two years of the Spiderman comic (first issued in 19631). This clip displays the use of continuity editing, basic techniques such as establishing shots, 180� axis of action, typical aspects of mise-en scene such as costume, make-up, lighting, acting etc. The film follows Peter Parker, who adopts his alter-ego after he is bitten by a 'genetically modified spider' as he copes with his new found super powers, tying in with the film's tagline 'With great power comes great responsibility.' The clip starts after Parker's Aunt May has been attacked by the Green Goblin, Spiderman's archenemy in the film. Peter is by her bedside when M.J. arrives with flowers, prompting a gushy speech more suited to a melodrama than an action film, and only enhanced by the soft orchestral music but nevertheless it is of importance to the film as it is the first time that Peter gives M.J. an indication of his feelings. The set is a side ward in a New York hospital, with standard 'government issue' type furnishings and d�cor; pastel yellow, blue and green striped and flowery wallpaper, blue medical units, cream finish hospital bed, with typical pale blue blanket. ...read more.

Another use of CGI are the two images reflected in the mirrored eyes of Spiderman's mask, on the viewer's M.J. falling from the bridge and on the left the plummeting cable car representing the split decision Spiderman has to make. These obviously computer generated images due to the fact that moments before the eyes the eyes are seemingly made out of the same material as the rest of the suit, rather than a mirror finished material. The use of CGI with in a 'superhero' action film such as this is necessary, due to the availability of the technology but also because such characters like Spiderman who are taken from a long established comic has a well established fan base, which will make up a large majority of the audience. If the film does not appear realistic, or too stylised in the way that older superhero films can now appear it will disappoint. This scene is crucial to the film, for several reasons. It presents the hero with the choice of rescuing his love interest or rescuing a group of innocent bystanders, which is typical of superhero films (The Superman films are another example of this), it paves the way for the main battle between the good and evil forces, allows for greater use of special effects and the rallying of the New Yorker's is a key underlying theme in the film. ...read more.

The covered hands of Harry suggest that he may well take a similar course of action as his father; in the comics he becomes the Hobgoblin therefore allowing for a development in a sequel (consequently Spiderman 2 comes out later this year.) The action and the costumes are vital in this film to allow it to excel in terms of genre. The action is choreographed well, particularly the fight scene between the Goblin and Peter Parker and the costumes seem fairly realistic in what can be deemed a fantasy world, which is counterbalanced by the real setting of New York and the normality of the characters rather than the intense lives their alter-egos lead. The sensitivity to which the September 11th attack been considered and come across with a fighting spirit and a tribute to Americans and New Yorker's in particular, as where else would civilians rally attack a threatening figure in the name of their city. The use of CGI and the camera movement throughout only serve to advance the quality of the film, and aid the narrative by creating realistic action and settings but also by always providing a sense of what is coming next. Although the narrative and acting may be a stylised in parts, such as the scenes between M.J. and Peter, it serves the genre of a superhero based action films, which often contain the odd 'cheesy' moment, and stays fairly true to the original Spiderman comic storyline. ...read more.