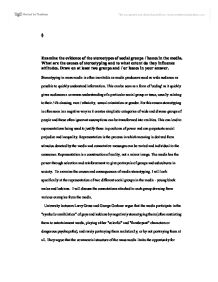 Examine the evidence of the stereotypes of social groups / issues in the media. What are the causes of stereotyping and to what extent do they influence attitudes. Draw on at least two groups and / or issues in your answer.

Stereotyping in mass media is often inevitable as media producers need as wide audience as possible to quickly understand information. This can be seen as a form of 'coding' as it quickly gives audiences a common understanding of a particular social group or issue, usually relating to their / it's classing, race / ethnicity,  sexual orientation or gender. For this reason stereotyping is often seen in a negative way as it creates simplistic categories of wide and diverse groups of people and these often ignorant assumptions can be transformed into realities. This can lead to representations being used to justify those in positions of power and can perpetuate social prejudice and inequality. Representation is the process in which meaning is derived from stimulus denoted by the media and connotative messages can be varied and individual to the consumer. Representation is a construction of reality, not a mirror image. The media has the power through selection and reinforcement to give portrayals of groups and subcultures in society.  To examine the causes and consequences of media stereotyping, I will look specifically at the representation of two different social groups in the media - young black males and lesbians.  I will discuss the connotations attached to each group drawing from various examples from the media.

University lecturers Larry Gross and George Gerbner argue that the media participate in the "symbolic annihilation" of gays and lesbians by negatively stereotyping them (often restricting them to entertainment media, playing either "colorful" and "flamboyant" characters or dangerous psychopaths), and rarely portraying them realistically, or by not portraying them at all. They argue that the commercial structure of the mass media limits the opportunity for representing diverse characters and that TV and film companies shy away form portraying gay people from fear of offending advertisers, investors and audiences. As there is limited true portrayal of lesbians, stereotypes are produced with little or no knowledge about the particular group. Common stereotypes of gay women in the media include 'butch dykes' 'lipstick lesbians' and 'pretend lesbian' . Perhaps the most commonly used stereotype is the 'butch dyke' recently evident in Channel 4's Shameless - a comedy / drama set in Manchester on a lower class housing estate - in form of fictional 'Norma' the butch gay lover of 'Monica'  who could also be identified as another common stereotype - the 'pretend lesbian' as she soon engaged in numerous affairs with male characters. Tim O' Sullivan comments on the 'notable contrast to the   dominant butch stereotype was provided by the character of Beth Jordache, a young, pretty and feminine lesbian (played by Anna Friel) in Channel 4's soap opera Brookside.'  (O' Sullivan, T. 2003, p. 93)

The portrayal of homosexual characters on television are often exaggerated representations as gayness is, essentially, invisible. Therefore, it is impossible to identify gay or lesbian characters . As a consequence of this, programs have adopted signs of gayness in order to portray characters' sexualities as quickly as possible. Such signs include certain gestures, clothing and even codes of language adopted in order to visualise the characters' homosexuality and identify with the stereotype. Often plots for gay characters focus on the other heterosexual characters acceptance of their sexuality - or the lack of it. It is often seen as a problem or inconvenience that people need to come to terms with, this can be seen on BBC 1's soap opera Eastenders in way of young female Sonia. Her main story line came with her ex-husband's disapproval of her new found sexuality, portraying the decision  as morally wrong and something that needs to be apologized for.

It could be argued that this stems from our own moral understanding of what it is to be 'gay'. Until 1994 being gay was considered to be a serious mental illness in the UK and it is still illegal in many countries with the death penalty being the maximum sentence. Also the Catholic church's view of homosexuality is the way of God for many followers and consumers of media. Jeni Quirke comments 'Most straight people find it quite difficult to understand lesbians because they are always looking to identify the male/husband and female/wife roles in the relationship. They are often baffled and confused at how two feminine or two masculine women can be attracted to each other. It goes against everything they  have been used to all their lives.' (Quirke, J. 2008, ONLINE article Butch, skinhead, wife-beating, pint drinkers?)  These stereotypes quickly become reality for people who's only perception of lesbians come from the media - this is when stereotypes influence in a bad way. O' Sullivan explains that 'stereotypical judgments are made by everyone as part of creating order out of everyday life as well as providing and maintaining a sense of group identity'. (p.79) This would suggest that we need stereotypes to understand each other within our social groups. We put groups into categories to understand what becomes our social reality, I believe this is more strongly evident in minority groups such as lesbians or my next example, young black males.

One ethnic social group that suffers from very negative stereotyping is young, black males. In the media they seem to be continuously represented as criminals or gangsters, a stereotype originating from American rap music that has presented itself in the UK coinciding with the rise in crime and gang rates in the UK with an average of 1 in 12 young black males either in prison or pending trail. As stereotypes work by taking a common feature (true or false) on a particular group and manipulating audiences into thinking it's the norm by implying that all members of that group also share those features. This type of stereotyping is having a very negative effect on the black youth of today, Yasmin Alibhai-brown & Daniel James Henry argue that the sensationalism found in newspapers are playing a major factor in these 'moral panics' - 'Newspapers circulate negative stories about young black men. It sells the papers. And when a group feels put upon, it will behave worse. So the papers run more stories. The young, gifted and black have become  young, bitter and black, partly because they cannot bear the degeneration of their own, partly because they are almost expected to follow this destiny.' (Alibhai-brown, Y + Henry, D J. 22 November 2008 ONLINE article Young, black and British: The young men who refuse to bow to the stereotypes). Although 24 of the 27 young males murdered in London this year were black, the white males killed received three times more coverage, notably Ben Kinsella and Rob Knox. It seems if a black male is murdered it is brushed aside as journalist Joseph Harker comments 'There is a racial dimension to the reporting. If the 1200 victim is black, it must be gangs, so move on – it's been explained. If it's a white teenager the thinking is: Gosh this could happen to any of 'us' (Harker, J. 22 November 2008 ONLINE article Young, black and British: The young men who refuse to bow to the stereotypes). The media coverage of young black males creates social realities and impose lasting impressions with people who are not normally in contact with black males - It even happens to the suave Labour minister David Lammy: "On the rare occasions when I am not working and I'm on the street," he reports, "I too experience somebody crossing the road because they think I am carrying a knife." (ONLINE article, see last reference) So if a grown man can feel this discrimination imagine the effects it has on young and vulnerable teenagers who are constantly stalked by prejudice of their race and the temptations to conform to these stereotypes.

As Michael Moor examines in his short documentary The African-American Wallet Exchange  this stereotyping is leading to the need for a moral re-think of our attitudes to ethnic minority groups. In the African-American Wallet Exchange Moore explains how the stereotypes of young black males in America are being used as scapegoats for sloppy policing with officers wrongfully shooting at black males because they believed they were holding guns in their hands when  in most cases they were carrying wallets. This is one of the most damaging effects that the media has had on any one social group with innocent men being killed at the hands of their country.

In conclusion, I believe that it is undeniable that stereotyping in the media has consequences and influences attitudes towards different social groups. However, audiences are becoming increasingly active and it now seems that the birth of the reader can be seen as the death of the author and consumers will interpret signals and codes in relation to their own understandings and experience which will, nearly always, contain some form of stereotyping. 1535