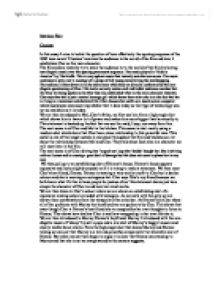 Tackle the question of how effectively the opening sequence of the 1995 teen movie Clueless involves the audience in the world of the film and how it establishes Cher as the main character.

In this essay I aims to tackle the question of how effectively the opening sequence of the 1995 teen movie ‘Clueless’ involves the audience in the world of the film and how it establishes Cher as the main character.

The filmmakers instantly try to draw the audience in to the world of the film by having non-diegetic music over the opening paramount sequence. The music played is “Kids in America" by The Muffs. This is very upbeat music that instantly sets the teen scene. The music continues to play over a montage of a group of rich young teens having fun and shopping.

The audience is then drawn in to the story more when they are directly confronted by the non-diegetic questioning of Cher. This tactic not only makes each individual audience member feel like they are being spoken to by Cher but also established Cher as the main character instantly.

Cher says that she is just a normal teenage girl which shows how naïve she is to the fact that she is living in a luxurious and sheltered life. Cher chooses her outfit on a touch screen computer which would seem even more improbable that it does today as that type of technology was not as available as it is today.

We are then introduced to Mel, Cher’s father, we first see him from a high angle shot which shows him to have a lot of power and makes him seem bigger than he actually is. This statement is backed up the fact that we see the maid, Lucy, run away from him.

The next scene is of Cher and Mel in the kitchen. This scene is shot mostly using a medium shot which show that Cher has a close relationship to this powerful man. This scene is one of the longer scenes in one place throughout the film and teaches us a lot about the relationship between Mel and Cher. They talk about Josh who is a character we will meet later in the film.

The next scene is of Cher driving her ‘loqued-out’ jeep that ‘daddy’ bought her. She is driving with no license and is causing a great deal of damage but this does not seem to phase her in any way.

We then pull up to an establishing shot of Dionne’s house. Dionne’s house appears expensive and looks slightly unusual as if it is trying to make a statement. We then meet Cher’s best friend, Dionne. Dionne is wearing a very similar outfit to Cher but in darker colours and she is wearing an outrageous hat. Cher says ‘She’s my friend because we both know what it's like to have people be jealous of us’ this statement shows just how simple the character of Cher is and how her mind works.

We are then taken to Cher’s school where we are shown an establishing shot of a expensive looking school crowded with teenagers. As we walk with the girls we are shown there conversation from the viewpoint of an onlooker. As Dionne tells Cher about all of her problems with Murray her boyfriend we are spoken to by Cher. This shows that even though Cher is Dionne’s best friend she to occupied by her own thoughts to listen to Dionne. This shows how shallow Cher is and how wrapped up in her own life she is.

We are then introduced to Murray Dionne’s boyfriend. Murray I introduced with the non-diegetic music of ‘shoop’ by salt n pepa and a low shot of Murray’s baggy trousers and clearly visible boxer shorts. From the high angle shot that shows Murray and Dionne talking we can see that Murray is a tall and powerful compared to the venerable size of Dionne. But when we see them begin to argue it is clear that Dionne can stand up to Murray and that she is not as overpowered as the camera suggests.

Cher yet again shows that she is hardly interested in her friends life by saying goodbye and walking off while she argues with Murray.

On the walk over to her next lesson Cher talks to us about high school boy and why she dislikes them.

The next scene in Mr. Hall’s classroom. As have shots of the class we can see that all of the children are pre-occupied with their own things and none of them are paying any attention. Although the children are not showing any interest in the lesson it is clear to see that the teacher still has control over the class. This is an important point because it shows how seriously the Americans take there education system, and how it is not an area to be shown to be in total anarchy.

We soon see Cher stand up and begin her speech we see instantly that she is wearing the most brightly coloured clothes in a predominantly dull classroom. As Cher begins to answer the given we are pulled into an irrelevant story about a party. When Cher suddenly mentions the statue of liberty the whole class breaks into applause even though they weren’t listening to her, this mocks how patriotic Americans are.

At the end of her speech Cher begins to play with her gum and we see that she has chosen yellow gum to match her outfit.

When Cher leaves the room we see her on the phone to Dionne. The camera follows her down the hall. The mobile phone was not a very popular gadget in this time and emphasises just how unusually rich Cher and Dionne are. Cher and Dionne then meet up in the hall and hang up their phones.

These are the key scenes in the beginning of the film they set the scene and pull the audience into the story.