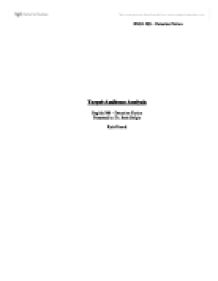 Target-Audience Analysis English 399 - Detective Fiction Presented to: Dr. Janis Svilpis Kyle Ricord Before being able to identify whom the magazine's intended audience was, it's important to investigate what the magazine wanted to achieve. The Ellery Queen's Mystery Magazine debut in 1941, and has since remained one of the most read mystery magazines on the market today. The magazines first editor-in-chief, Frederic Dannay explained his manifesto for Ellery Queen's Mystery Magazine as being to "raise the sights of mystery writers generally to a genuine literary form," to "encourage good writing among our colleagues by offering a practical market not otherwise available," and to "develop new writers seeking expression in the genre." It's interesting to note that the magazines manifesto did not include any reference or obligation to the reader, but instead concentrated on the writers of the magazine. Was it Dannay's intention to have successful sales of the magazine, or was it to have successful stories in the magazine? ...read more.

This idea isn't too far of a stretch for the story depicted by the cover as well. In the story, an attractive, intelligent woman (Marion) has murdered her husband and has gotten away with it for fifteen years until the guilt consumes her and she's forced to tell a local commissaris. But what of the content itself? All of the stories were less than fifteen pages in length and fairly easy to read (having only to have looked up one or two words). Could this facilitated reading be a beacon to a type of reader? Of course it could. Easy reading material accomplishes many things, some of which are the inclusion of every type of reader (not just educated people), and the practicality that the magazine is to be read as a leisure pursuit and not as an applied obligation. On the opposite side of the coin however, one could say that easy reading does not really appeal to well-educated people perhaps due to under-stimulation of their higher functions. ...read more.

As for immigrants, the facilitated reading and variable locations of the stories may appeal to them as well. Authors such as van de Wetering and locations such as Norway and Denmark, may offer them an affiliation with other successful immigrants, or a return to familiar locations. Erin Smith's account of the targeted readers of the Black Mask stretches much further towards other magazines' readers also. So perhaps Frederic Dannay had it right - forget about who we're trying to get to read the magazine, let's concentrate on who we're going to get to write the magazine. Maybe Ellery Queen's Mystery Magazine continues to enjoy increasing success because it does not target a specific audience; it appeals to everyone in some way or another. Male or female, educated or the working class, immigrant or native citizen, if they're interested in detective fiction, they're bound to be attracted into purchasing one of Ellery Queen's Mystery Magazine (or at least sending away for their free trial issue). ENGL 399 - Detective Fiction ...read more.