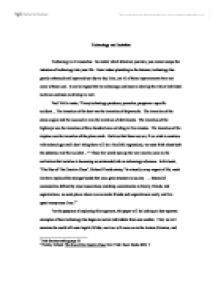 Technology and Isolation Technology is all around us. No matter which direction you turn, you cannot escape the intrusion of technology into your life. From indoor plumbing to the Internet, technology has greatly enhanced and improved our day-to-day lives, yet all of these improvements have not come without cost. It can be argued that as technology continues to develop the risk of individual isolation continues to develop as well. Paul Virilio wrote, "Every technology produces, provokes, programs a specific accident... The invention of the boat was the invention of shipwrecks. The invention of the steam engine and the locomotive was the invention of derailments. The invention of the highways was the invention of three hundred cars colliding in five minutes. The invention of the airplane was the invention of the plane crash. I believe that from now on, if we wish to continue with technology (and I don't thing there will be a Neolithic regression), we must think about both the substance and the accident..."1 These few words sum up the very need to come to the realization that isolation is becoming an unintended risk as technology advances. In his book, "The Rise of The Creative Class", Richard Florida states; "In virtually every aspect of life, weak ties have replaced the stronger bonds that once gave structure to society . . .. Instead of communities defined by close associations and deep commitments to family, friends, and organizations, we seek places where we can make friends and acquaintances easily and live quasi-anonymous lives."2 For the purposes of exploring this argument, this paper will be looking at four separate examples of how technology has begun to isolate individuals from one another. First, we will examine the world of Laura Ingalls Wilder, next we will move on to the Amana Colonies, and then we will take a trip to Japan and finally end our tour in Greece. ...read more.

The lifestyle of the Japanese has been transformed enormously by the widespread use of modern household appliances, the expansion of the instant and frozen food industries, and the availability of ready-made clothing and other daily necessities. These conveniences have given families more time for leisure, educational, and cultural pursuits, particularly in the case of married women, who previously were tied down by household chores. With less time needed for housework and more time to spare for leisure, an increasing number of married women have been finding jobs, enrolling in courses at community centers or universities, or participating in volunteer activities. The spread of car ownership and of such household appliances as television sets, stereos, videocassette recorders, and air conditioners, as well as the increase in leisure time, signify a material improvement in the standard of living in Japan. A change in the social awareness of the nation in the wake of the information revolution of recent years has given rise to a qualitative improvement too. The people now are calling for greater opportunity for emotional fulfillment in the form of reduced working hours and more opportunities for participation in volunteer activities and other pursuits.6 Personal observations of Gena Koelker that were gained during a trip to Japan can attest to both the influx of technology and the very social nature of the Japanese people. Gena observed that no matter where you looked, more so in the surrounding cities than in Tokyo itself, people were interacting. There were no malls to be driven to, and people seemed to buy only enough groceries for a few days. This may have been due to the fact that people either had to carry their parcels on their bicycles, on the subway, or walk with them. However, this simple fact led to interactions of patrons of shops with vendors, and patrons with patrons. There was much smiling and most people seemed to have known each other for years. ...read more.

Many homeless people have come to find that these chat areas give them a sense of community and home. Homeless people are usually the group of people who are neglected by the society and it is meaningful for them to make friends who don't discriminate them for what they are and with who they can share their loneliness. Therefore, the Internet has become a tool of interaction with people for those who have difficulties interacting with others in real life. Some would claim that the impression of being in a place that expands beyond the monitor and interacting with someone far away is only an illusion that the Internet has created. The term "cyberspace" has become so convincing to some people that they have been drawn to it and have become almost addicted. They argue that this "cyberspace" doesn't exist in reality because the basic elements that build up this virtual world are only electronic signals and computer programs, which cannot be used to substitute for the warmth and emotion involved in real human interactions. According to Daniel Brandt, who wrote the book Digital Drug, a person is nothing more than a cryptic e-mail address, and thus, disappears into the endless numbers of people as just another name in the crowd of information. He believes that what represents a person's identity on the Internet is only an e-mail address that doesn't carry any personal traits and characteristics, and people can choose to erase and create a new identity on the Internet anytime they want. Because the Internet is based on anonymity, these people conclude that the interactions on the Internet are meaningless since people don't take any responsibilities for what they have said and what they have done. These critics conclude that, eventually, people would discover that they still feel lonely and isolated because they can't form real relationships with other people on the Internet. However, the anonymity doesn't prevent people from interacting with others; instead, it breaks down the barriers of interactions people have in the real world. On the Internet, people are equal without bearing any stereotype. ...read more.