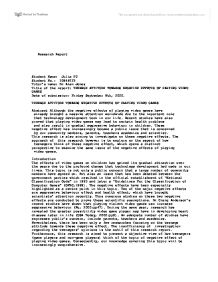 Research Report Student Name: Julia PU Student No.: 30646723 Tutor's name: Dr Alan Jones Title of the report: TEENAGE ATTITUDE TOWARDS NEGATIVE EFFECTS OF PALYING VIDEO GAMES Date of submission: Friday September 8th, 2000. TEENAGE ATTITUDE TOWARDS NEGATIVE EFFECTS OF PALYING VIDEO GAMES Abstract Although the negative effects of playing video games have already brought a massive attention worldwide due to the important role that technology development took in our life. Recent studies have also proved that playing video games may lead to certain health problems and also result in gradual aggressive behaviour in children. These negative effect has increasingly became a public issue that is concerned by our community members, parents, teachers academics and scientist. This research is also aiming to investigate on these negative effects. The approach of this research however is to explore on the aspect of how teenagers think of these negative effect, which opens a distinct perspective to examine the same issue of the negative effects of playing video games. Introduction The effects of video games on children has gained its gradual attraction over the years due to the profound change that technology development had made in our lives. This topic is not only a public concern that a large number of community members have agreed on. ...read more.

between 1995-1999 to show the deficiency in current Australian video game regulation(OFLC, 2000). After the completion of the third stage of this project - "National telephone survey" involved 1310 people in total - one of the major findings is uncovered as "Most people associate positive feeling such as enjoyment, happiness, exhilaration, relaxation and challenge, with playing computer games"(OFLC, 1999). It could be suggested that this is the major reason game players are less sensitised with the negative effect of playing video games than non-game players, game players find enjoyment in playing video games rather than being negatively effected by it. Conclusion In conclusion, this research report is aiming to open a distinct perspective in regards of the studies on negative effects by investigating teenagers' opinion on this topic. Teenage group is not only a major group of customers that involved in video game industry, but also a large number of this group are directly involved in the experience of playing video games. By studying their attitude towards video game effect will enable us to obtain more precise account of this topic. Furthermore, this study of teenage attitude could be extended, such as narrowing the definition of health problem into particular categories. Teenage attitude studies towards video game effect will benefit us as it is an access to explore on the profound understanding of negative effect studies. ...read more.