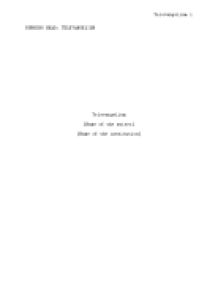 Televangelism in the USA

﻿Televangelism RUNNING HEAD: TELEVANGELISM Televangelism [Name of the writer] [Name of the institution] ________________ Televangelism Evangelism Evangelism is derived from a Greek word with its literal meaning ?good news.? It is commonly related to the missionary work. It is the duty of every evangelical to spread the message of Jesus Christ to the whole ministry. Evangelism can be analyzed in four different stages: missionary operations, the time of Christ, the modern era, and the late 20th century to the present. Evangelism has a global mission in increasing faith in Jesus Christ. In the New Testament, Christ tells his adherents to ?go make disciples of all nations.? After the death of Christ, some rendered this passage literally, and evangelism became a Christian mission enterprise soon. (Lakeou, 2005) Televangelism Tele means something at a distance and evangelism as already mentioned above refers to the preaching?s of the Christ. ...read more.

With the increase in globalization, the televangelists have spread far across as from where they originally started. Televangelism is gaining popularity with the passage of time in South American countries such as Brazil and Republic of Chile. Some countries have a more regulated media where there are restrictions on the access of such TV programs. In such cases religious viewership are broad casted via TV companies. (Epstein, 1975) History The Communications Act was broadcasted by the U.S. Congress in the year 1934, which authenticated the Federal Communication Commission (FCC) that allowed access for broadcasting relative license. The Congress affirmed that the spectrum allocated was not in favor of any individual or for that matter any company. In response for this monopoly, the station was compelled to broadcast "in the public interest." From the very beginning, religious broadcasting was reckoned one of the ways of accomplishing a station's "public interest" obligation. ...read more.

(Altheide, 1976) There was devastating policy programs by the FCC to those programmed that carried free major (main line) groups. Without taking any decision the FCC ruling offered just 53 percent of the total religious broadcasting in paid time. (Epstein, 1993). Growth and Broadcast Cost In the United States there were 60 religious groups who were operating their own radio stations and hundreds of other secular broadcasting services which meant that frequency collision affected and there was much interference. This ultimately led to chaos and the emergence broadcast however, the Radio Commission in 1934 made it compulsory for the radio stations to donate a certain airtime to public service programs and religious leaders were given access to free airtime. The matter thus was resolved peacefully (Butler, 2007). Despite this brief encroachment on the practice of selling airtime, there was no period of fragmentation in the early day?s standardization, and only later, with the arrival of cable and satellite television, did religious broadcasting become slightly more eligible in terms of who could broadcast a message (Lakeou, 2005). ...read more.